I like cool words. This one should be the name of a rare and expensive  tropical fish or some exotic dessert at an upscale restaurant.  Perhaps it already is and I just don’t know yet. Apparently it is the name of a gothic androgynous Asian punk rock band whose images of cross-dressed Japanese men scare me. As well, it is the title of a poem by Lewis Carroll about ghosts. Freaky!! Honestly, I just like the beat. I had no notion what all the connotations were. ” A gathering of phantasms (random images) “. Trippy acid psychedelic melted crayon puddles on a drug laden coffee table, a lava lamp swampily percolating day glow colors upward in an unholy glass chimney.  Jimminy Cricket Hendrix cranking loose ear wax deposits of the devotees at the coffee table temple. Yeah, phantasmagoria, man. Bong talk. “Up, whoa, up. Hold it. Whew!!”

Rhythmic words with lots of visual meaning are even more attractive for me somehow. A tossed salad of rare images executed with polysyllabic vinegar dressing. So seductive, don’t you sink so? I remember a particular female teacher coworker who had kids spit their chewed gum out in a mason jar that she kept on her desk. It was oddly attractive in a kaleidoscopic spit-covered sort of way. There was color, form, texture, and patterns that attracted you while at the same time the knowledge of the germs, disease and slime repulsed you. Similar to a beautiful pit viper, a copperhead for instance– gorgeous and deadly wrapped into one meaty tube of snake sushi. I am drug free, Blogajuanitas. For the record. I suspect you were wondering… but used chewing gum croutons on that salad might just work visually.

Way way back in the day day I went to see the Grateful Dead. I think I was a sophomore in college. It was quite the experience in 1976 or 77.  “Wave that flag, wave it high and wide”. Drugs were in such proliferation, I recall the crowd surfing camera focusing on a guy in the front row snorting a spoonful of powder cocaine and beaming it onto the jumbo screen above the 19,000 fans gathered below. They cheered. I had appeared low risk to the Maryland State Troopers, I suppose, so I was not searched as thoroughly as the unwashed Dead Heads entering the Capital Center.  A bottle of wine inside my jacket made it through the screening. Once seated the bottle became communal property and was passed to the right as a buffet of other things came along throughout the five hour musical orgy. Joints, balloons with dental gas, pipes with resin…. My children, this was all a long time ago when Jimmy Carter was president, or should I say, before Ronald Reagan was. Like our country politically, everything was moving to the right. 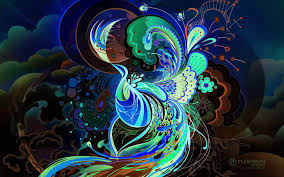 Which leads to Led Zeppelin somehow by way of the English group Yes. Under certain circumstances their looping lyrics would transport the adolescent listener to other realms. Yes, that is. The opening to Roundabout was funky cool and spacey, lighting up visual neural tracers behind my eyelids, shot by a paintball artist.  I sat in my neighbor’s house in front of stacked speakers that were taller than I was and just absorbed the sounds ricocheting all over his family room. On more than one occasion the windows rattled and his nosey neighbor Ruby Rogers would call his dad at work to warn him of nefarious goings on at the Cooper’s house. “They’re having a pot party, Bob. My Forrest seen it and he’s such a good boy he told me rahght away.” It wasn’t exactly like that but close enough.

In any event I sketched black ink replicas of the Yes earth image on my geography binder with the lyrics circling the planet. Trippy cool.  That was the geography I was interested in, not the drivel we were getting from Mr. Dillard. He was a part time state delegate so we had many, many substitutes to cover for the guy when he was in session in Richmond. Why I remember this I can’t say. It’s just a memory that flows out from other memories, the Yes albums, the songs, the lostness of my teens. I remember a strong disconnect from the kids in that class who were mostly younger. I didn’t want to be there. I wanted to be in another dimension.
Zeppelin owned the 70’s, Blogkids. Their tunes dominated the FM radio stations, which probably doesn’t mean a thing to you youngsters since you can I-pod and I-tune and special order on Pandora any music you like. You would not have been able to handle the 70’s. Turntables and vinyl records in milk crates and fruit boxes.  Heavy, oh yeah. Something cosmic in Zeppelin songs would erupt to send teens soaring above their tedious reality. Like few other bands, they painted soundscapes that had big feelings brushed broadly on sky canvases, leaving just a taste of phantasmagoria on your music tongue like cilantro and garlic mixed with lime. Not exactly but close enough. Stairway to Heaven was their megahit that will probably be around for another century. But there were many other memorable songs. Communication Breakdown, Going to California,  Whole Lotta Love, Your Time is Gonna Come. Black Dog, All of My Love, and many more ear popping tunes that fought back against the sappy rising disco tide of the time. If disco was all about the external geography illuminated by the shimmering disco balls, then Zeppelin illuminated the lands inside that disco ball where imagination and adult emotions were bunkered.
In any event it all passed by. There is no holding back the moment. Even if it is gloriously phantasmagoric.