I just finished my first Facebook Fanatic encounter. Wow! It was creepy and felt like a bar fight from a different time zone via Skype. I briefly opined about my least favorite human being, Donald Trump, and a highly educated, erudite scholar sucked on to my whimsy like a leech. It was actually funny from my side, but I am troubled that Professor Righteous is grinding his molars tonight instead of sleeping peacefully. An old friend once shared the saying, “That guy is so tight that you couldn’t pull a pin out of his ass with a John Deere tractor.” Here is another example of such a vacuum sealed  tightness. I posted a brief snarky comment about the Trumpster being an insult to thinking people and smart dogs, and my cyber adversary took off, accusing me of calling him a stupid dog; me being a liberal; not a Christian; a hypocrite, and more. He even said that I was Trump-like in my rhetoric.  Well, I asked him, if you find my impersonation of the Great One insulting, why cling to the original, Mr. Logical?

Man, it was fun. I teed up twenty words and he wrote an angry reactionary dissertation like a mad golfer hitting a jumbo bucket of balls. I speculate that he’s probably still seething with rage against these meager snarky comments. I wish there were a way to cash in on words generated by others on the internet. From one jokey line of mine, this guy made himself a running joke of a thousand words or more. Vitriol makes a bad salad dressing, Dude. I don’t care how good your olive oil is. He is still chewing on the rubber worm bait, thinking it’s some opening shot in the Revolutionary War. No chance.

Charlie Chastiser got his panties in a wad. And being a moralist of the first order, he declared war on all the folks who did not agree with his extremism or the Donald. It was great stuff, lessons in rhetoric and logic were self soothing for him. But guys like that worry me. I fear that his vain attempts to rally the troops will fail and he will wind up in a movie theater with a legally purchased submachine gun and kill everyone who came to see a mildly spicy chick flick starring Ben Affleck… all in the name of National Purity. He has swallowed the poor victim pill and can now justify all genocidal tendencies. In the post-homicide interviews with his neighbors and coworkers, they will say things like,

“He was a very intense man who broke the decaf pot when it was introduced as an option.”

“He was very neat and punctual.”

“His desk was immaculate… but I didn’t really know him well.”

Inside the loner’s mind he monologues to no one…

“Surely others cannot have value or meaning when they fail to toe my Fascist line. And I wouldn’t have to be a Fascist if they would just do what I expect. So, logically, I must exterminate them in the name of my superior beliefs. I am, therefore, a modern knight killing in the name of a just cause.”

It’s a scary world, blogistas. Don’t trust me, please. I am not a reliable source. I prefer good stories to great ideologies. But do trust your own assessment of weirdos who cling to ideology like a lab monkey clings to its wire cage mother’s breast. Something is wrong with such fear driven intensity. It promotes survivalistic reactions, an “us versus them” mentality.  The Donald is good at channeling this primal anger. He bloviates against the Chinese, as if they are a monolithic group of same think.  The Yellow Threat. He blows hard against Mexicans, as if they are all greasy rapists  posing as lawn care technicians in high brow neighborhoods just waiting to pounce on Republican housewives. The Brown Threat. He knows, because, you see, he has talked to one Border Patrol agent in New Mexico once. And that is gospel, after all. God Bless America. The White Threat to the multicolored world. 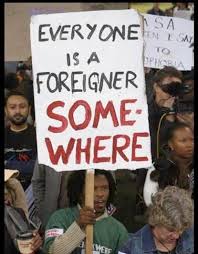 To reject xenophobia is not an unpatriotic act nor is it a soppy milk toast liberal position. Being xenophobic does not make you a red blooded American either, whatever that is. Immigrants built this nation. Some came legally as slaves or railroad workers. Some came illegally by jumping ship in the harbor. Some came through Ellis Island. But please, do not believe the mythology that everyone came with good hearts and tears at the Statue of Liberty. After all, she didn’t get here from France until 1886. And let’s not forget that some U.S. citizens were here to begin with. Our Native People tried to stem the flow of the self righteous and better armed European illegals who used the self serving rationale that they had a God given right to occupy “unused lands”. It didn’t turn out too well for the Native Peoples, but let’s not dwell on that ugly chapter of U.S. history. No, America would never again relocate other people groups based on fear or greed until the Japanese were interned in WWII. Xenophobes have feared Catholics, Japanese, Chinese, Irish, Germans, Jews, Mexicans, Moslems, Russians, etc. over the past two hundred years. It’s the same old “us vs. them” reaction steeped in fear of the different.

We can thank The Donald for digging up the immortal head of the Hydra so simple minds can play with it again. This week’s feature is “Phobia from the Planet Xenon”. Feeding the hate and fear machine will always draw an audience… just like horror movies manage to continue their tradition, reproducing faster than mice. However, every so many generations the throttle gets loose and a majority sate themselves on easy to digest propaganda, no hard chewing required. In that dark world dentists and minor office clerks become judges, jurors and executioners, all quite legally, thank you very much. The xenophobic genie is hard to get back in the bottle once uncorked.

I like the serendipity of my life. This  morning I could not remember where my scheduled  counselor meeting was supposed to be, so I wound up unscheduled at the coffee shop on Dustin’s birthday, a provisional nonvoting member of coffee nation. I did not know this little piece of info since I was not current with Facebook at that moment. I just ordered my medium coffee and was walking toward the door when Big Bald Vinnie came walking in. We greeted one another and I started to explain that we weren’t meeting since it was the second Thursday of the month.

“Well, Steve and Gene said they were coming.”

“Oh, an unofficial meeting of the nation.” I suspected a coup brewing in insulated coffee cups. “I’ll stick around.”

Vinnie and I chatted about his family and the end of his Great Dane puppy experiment.  “My wife didn’t see that coming. And we don’t even have papers on the dog.”

“I’m not following you. Would it be better to have a defective Great Dane puppy with papers?”

“There’s the fence and the toys and the food and the vet bills and the…I could have sent a kid to a semester of college with what we spent on the dog.”

“Well, your marriage is better than ever. So you have that.”

“True… could take another cruise with the wife for what I have in that dog.”

Ronnie from Jersey strutted in. Greetings. He joined us at the impromptu gathering. Vince was on his way to work in Hershey, PA but had time to burn with us. Ronnie is recovering from surgery and a life of construction work.

“Yeah, I’m from Jersey. Ya know, it seems like there’s a lot more murders around here lately,” said Ronnie.

“I’ve noticed that since you moved here, Ronnie. Are the landfills full of bodies in Jersey?” I added in.

“No, well, the Mafia has reserved lots for future appointments, ya know, like pre paid burial vaults.”

We got on to the usual nothing talk that marks a group of guys who are comfortable with one another. Historic storms, the Jersey Shore, shootings, and noisy Harleys. Before we even paused to look up, Big Steve rolled in sporting his new 5–0 look. He was without Gene but confirmed that it was Dustin’s birthday and that the young man of 38 would soon be joining us.

Steve has a unique mind. Somehow we got on to field sobriety tests and Steve amazed us by reciting the alphabet backwards while also turning around to face the wall. It was a double reverse verbal gainer. The Judges gave him 9.4, 9.6 and an 8.1 from the Jersey judge who was envious, I think, of this uncanny skill. Steve also drinks frozen mochas which will freeze mammal brains; however, since I believe he has a reptile’s brain, he drank deeply without even a hint of a brain freeze. Over this mysterious brain is an ear muff hair style with a wide landing strip down the middle. But sitting across from Razor Bald Vinnie, Steve looked like Bon Jovi. (This is a bone for the Jersey Judge in case there is a round 2 of amazing stupid human tricks later.)

As Ronnie doctored his hot coffee, the legendary Lance entered and nearly sat in Ronnie’s just vacated seat. However, being the king of pilates, he moved as if on a hinge and did not touch butt to chair. Instead he dragged over an ownerless chair to our shrinking round table. Introductions were made all around for Sir Ronnie’s sake, who is not usually at the Round Table. The skillet of wit was now hot and sizzling since Lance is both a barbershop raconteur and a template of fashionable haberdashery, according to him.

Critical mass was achieved and the jokes, tricks, references and silly words came often and easily. In a group of five guys it is possible to have three or four concurrent inconsequential conversations, which we did.

The topics were interwoven…

“You mean the coach, Gino…”

“Well Bill had a reference from him…”

“Not good enough for our local high school, though.”

“No men’s retreat this year. Too much shaking up at church.”

“I’m appointing you, Vinnie, to investigate this.”

“Just save all your receipts.”

“Did you say receipts or retreats?”

Dustin walked in and saluted us as is his habit as a former military member. Now it got dangerously goofy like an overheated nuclear reactor with too many loose electrons smashing into one another. The caffeine effect was sending verbal pulses across an eighteen inch round table at warp 9 speeds. An unidentified guy in a ball cap said hello to Steve.

“You know, from church. His wife is that lady…”

“Oh yeah, they sit behind me.”

“No, that’s not the same guy, you’re thinking of what’s his name.”

“With the big nose?”

“Yeah, Brian. His wife was the one who told me about setting up shop downtown.”

“Alright, I still have no idea. But it’s all good.”

Lance, “This reminds me of an episode of Cops where they’re busting a dude and he don’t know nothing. The cop says, ‘What are you doing?’ and the dude says, ‘Well, I was over there with them dudes but then what’s his name came along and they started into it and I got outta there when I seen you guys show up. And I don’t know nothing.'”

Dustin, “That’s just like a conversation at your barbershop, Lance.”

“You know, the wrestler who was a governor?”

“No, he’s the one with his nanny and the wife on t.v. A Kennedy lady.”

And those are the Real Lives of The Husbands of Franklin County.