Outside my second story office window is a charcoal parking lot that holds maybe thirty spaces. Beyond that is the unspectacular three story beige southern wall of a large church. It looks like a rectangular cruise ship stuck in asphalt and concrete. A rusted green dumpster sits at the left side of that wall where the alley runs through north/south behind the church for easy trash pick up on Monday mornings. There is a utility pole exactly halfway between my window and the wall, with utility wires running horizontally across the townscape framed by my square window. Traffic rumbles up and down the poorly paved alley and zooms by the opening of Route 30, between the end of the church wall and what used to be the Salvation Army store. It’s the sort of view that only a New Yorker could love. In the upper left quadrant, blue sky completes the picture. Two streaks of grey-bottomed clouds stretch diagonally northeastward this October morning. 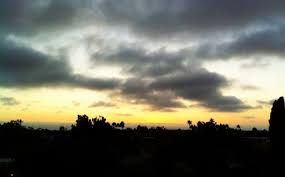 Before noon the shadows run right (East) to left (West). They straighten out and move backwards as the day wanes. I look out on this intersection of boxes planted around the black macadam streets, trying to supply the missing beauty. It could be beautiful in an urban sort of way, but no one seems to want to put on shutters or hang a nice sign in front of their building. No plants or flowers are evident. The paint choices are tedious– white, beige, green. Not that it’s worth the effort, but I think a hipster urban decorator could easily jazz up this boring patch of boro.

In the left third of my view is a narrow opening between two buildings that reveals a green patch of unpaved ground. It’s a little gem of a park in the middle of downtown Chambersburg where a branch of the Conococheague Creek tumbles past the remains of an old mill wheel. I think of a cherished ruby presented in a stained old cigarette box; the heart of our town deserves better presentation. Instead, the prettiest spot in town is surrounded by parking lots and the backs of sad buildings. Poor planning, I think. 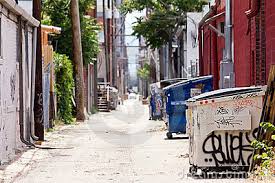 That beautiful spillway was a primary reason for the rest of the town’s existence. But now it’s just an afterthought, after the streets were paved and lit. After the industry had come and gone. After the money had been extracted from the intersection of Commerce and Greed streets. Still, it remains defiantly beautiful, like a prisoner who grows younger and more vibrant behind bars, wrongfully convicted by impatient, aging jurists.

It’s a funny thing, beauty. It seems to be reborn every year if not every season. Take that rusty dumpster, for example. Last fall I was walking by it and noticed an intense bluish-purple dash of color against the beige background wall. Growing up out of the gap between macadam parking lot and concrete block wall was a purple iris which had somehow taken root. I imagine that funeral or wedding flowers had been dumped sloppily and a single tuber had found its way into the sheltering gap. I took a picture of it with my cell phone. This accidental drop of beauty spoke to me of hope.

Then there is the stream that cuts through our town. I walk by it every day and wonder why it is not esteemed. It could be and should be so beautiful, except locals dump mattresses and shopping carts in its pure waters. There is your basic littering and then there is raping and scarring a landscape. I think willful polluting of a pristine stream deserves more than a civil citation. But then, we’d have to jail the strip mining companies, wouldn’t we? I wonder what the land would look like if it could be returned to the First Nation folks for one hundred years. That stream would be honored, I’m sure, because it provides water and fish and game and direction and transport, i.e., life. But we don’t see that any more. It’s just that wet thing below the bridge.

Again, we have jewels, pearls buried in the excrement of swine. Like old relationships that are taken for granted, we don’t even see the beauty of our blessings. We are a faithless bunch. This town owes its birth to the Falling Spring that feeds the stream that nurtured it… and we have literally turned our backs on it in the pursuit of speed and greed. Now the town fathers look to the torrents of Interstate 81 for more. Prime farmland is paved over for gaudy strip malls and convenience stores. No expense is spared to grease the path of the big chains who promise concrete jobs and progress. We are now a mecca of box warehouses that supply box stores along the arteries of rail and roads. And this display of beauty is the equivalent of a bleached blonde Hooters waitress. Alluring? Yes. Real? No. Come back in ten years and check it out when it will be as sexy as a cigarette butt.

I’m thinking about trees in planters out there. Heavy pots full of flowers. Window boxes spilling out petunias and ivy and such. Spots of beauty that say, “I see. This matters. I am renewing this urban desert.” Now I’m wondering about setting these signs of hope outside my office. I can’t stand vandalism, but I can’t let vandals stop beauty and hope. Yes, I could certainly add two more flower boxes, two potted trees and a whiskey barrel of flowers. These will not be accidents or after thoughts, not prisoners but free exclamations of life being lived. Isaiah 55:

You will go out in joy
and be led forth in peace;
the mountains and hills
will burst into song before you,
and all the trees of the field
will clap their hands.
Instead of the thorn bush will grow the juniper,
and instead of briers the myrtle will grow.
This will be for the Lord’s renown,
for an everlasting sign,
that will endure forever.”