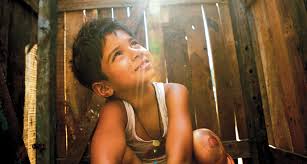 In the movie Slumdog Millionaire there is a scene early on where the main character’s abusive and jealous brother locks the Slumdog boy into a public outhouse to prevent him from experiencing the arrival of a Bollywood movie star in the slums.  Hundreds of poor kids run to meet the movie star as he arrives by helicopter like a divinity descending. All the slum children clamor for his attention and autograph.  Slumdog is desperate to meet this celebrity, so desperate that he takes his only available option to freedom…he plunges about 8 feet into the poop tank below the outhouse. He comes up covered in human waste and runs headlong toward the crowd around the star. Because of his repulsive appearance and stench, everyone moves out of his way, allowing him to meet the star and gain his autograph. His brother is incensed by this stroke of fortune and sells the autographed picture in the next scene, thus stealing his little brother’s joy. This theme of jealous power and resentment versus innocent love and forgiveness continues throughout the film.

However, the excrement covering the Slumdog is not his own. It really just reflects his older brother’s sin. His brother knew exactly what he was doing to the innocent Slumdog. He did not want Slumdog to have this extra-special experience. Instead he greedily sought the whole thing for himself only.  Good old human nature does not vary by culture. Whether it’s Jerusalem in A.D. 29 or Calcutta in 2009, people behave badly. We may recoil at the caste state of India and the hierarchy of Jewish culture in Jesus’ time, but we have our own pecking order in modern America. The great melting pot ideal still excludes the poor, the tired, the huddled masses, and the wretched refuse of teeming (foreign) shores that are welcomed symbolically by Lady Liberty. They can come in the back door, thanks very much, just to do the dirty jobs and then leave quietly.

As I’ve thought about human sin, I’ve thought about excrement. Our sin is like that—repulsive to God and boiling in its own stench. It creates a barrier between us and God, who would love to embrace us. Unfortunately, in our stench and mess we simply add to the barrier with anger, jealousy, resentment, envy, hopelessness, etc. We smear sin all over our spirits, then layer sin over sin like icing on a decadent, poisoned cake. God wants us to abandon the barrier, to disengage from sin. By turning toward God we are cleansed. He wants to autograph our hearts but sin gets in the way. We don’t need to be perfect to approach God, but we cannot continue to sin and gain access to His holy Presence. We must repent.

Salvation is free never earned. Like the movie star’s autograph, salvation is a gift, a sign that the Slumdog met his movie idol.  How great it is to have Jesus Christ’s autograph on your heart!  Others may try to steal or destroy your salvation. Demons may attack you, but they cannot destroy or steal your salvation. Ever. It’s tattooed onto every cell of your existence.

Later in the movie the Slumdog appears on the Indian version of Who Wants to be a Millionaire?  He moves through each round’s question by recalling memories from his life, during which he finds the answers to these obtuse questions tattooed on the folds of his cerebral cortex.  He does not have to provide the movie star, just his name. He does not have to produce a U.S. hundred dollar bill, just the name of Benjamin Franklin. He does not have to produce the gun that was aimed at his face, just the name Smith & Wesson. Likewise, just calling out the name of Jesus Christ is enough. His name protects you, completes you, and advances you. It’s tattooed on every cell of your existence.

Slumdog advances round by round and becomes a national phenomenon while the girl he loves seeks him, and his prodigal brother finally repents of his sins. Simply naming someone or something by faith keeps Slumdog alive while his brother sacrifices his own life as a sort of guilt offering to free the Slumdog.  The movie’s plot is told in this fashion, through random questions whose answers create a linear narrative. The driving force throughout the movie is love. Love triumphs over seemingly insurmountable evil, including the rigged t.v. show and its greasy host.

Salvation is free not earned.  Though a greasy Prince of Darkness would cheat you out of your reward, he cannot. Why? Naming Jesus Christ is the key to each moment, each round, the entire contest of life. Jesus has called us to an exuberant, abundant life with Him not to millions or celebrity. He wants us to run boldly in our faith and not to cower in fear. Understanding that sin is our own hardening excrement is the beginning of wisdom. Repenting and washing it away is the critical first step for us to embrace God’s Holiness and to reflect His Glory.

Satan attempts to condemn us as Slumdogs who are hopelessly covered in excrement, while Jesus redeems us as His precious children, pure and simple. And we each have a choice as to which voice we will believe: the excrement of sin or the sacrament of love.