In the 1970’s disco music took over the airwaves and clubs, even though most folks knew it had no substance or meaning, no long term significance. Ephemeral fly poop, nothing more.  Disco had a danceable beat and that was what the majority culture craved– touch dancing at clubs. It was a vehicle for flea brained extroverts to flirt and seduce one another in their new overblown bell bottoms or high heels. It was exactly what I dreaded. I did not want to dance to begin with, but to do the Hustle or similarly choreographed dances seemed like devolution to me, a betrayal of the 1960’s ethos and a return to conformity. For me music had always been something to listen to in private or in a concert hall or club scene. Dancing? No. It was too commercial or shallow. Then again, I may have been depressed as I listened to my Bob Dylan, Joni Mitchell, Neil Young, Jackson Browne, Clapton, Leonard Cohen, Tom Rush, Hendrix, the Dead, singer songwriter types with deep lyrics and moods that were not celebratory. But, on the other hand, they were not fluffy and sacharrin cotton candy odes to self indulgence. Just a disco beat like mindlessly chewing gum. Something about disco added up to corporate profits somewhere. It was synthetic, poly-ethical and thus poly-esterical, relying on studio overdubs and overproduction. Live disco did not make sense, so I believed. No more live shows, just dancing in shiny clothes and platform shoes to a d.j.’s canned musical taste. Gag.

I grew resentful and contemptuous of the ubiquitous disco sound. Saturday Night Fever’s soundtrack went viral before the term was conceptualized in the non-medical world. “Stayin’ Alive, ah, ah, ah, ah, stayin’ aliiiiiiiiiiiive.” I could not conceive of purchasing any of that crap, that crinkly wrapping paper music. It just seemed like music made for selling things, jingly and hollow, audio junk food scientifically altered to appeal to your ears and impulses. Mall music for a recessionary economy.

I researched a bit on Wikipedia for disco’s origins.

Origins of disco as a term and type of nightclub

By the early 1940s, the terms DJ and Disc Jockey were in use to describe radio presenters.[11] Because of restrictions, jazz dance halls in Occupied France played records instead of using live music. Eventually more than one of these venues had the proper name discothèque.[11] By 1959, the term was used in Paris to describe any of these type of nightclubs.[11] That year a young reporter Klaus Quirini spontaneously started to select and introduce records at the Scotch-Club in Aachen, West Germany.[11] By the following year the term was being used in the United States to describe that type of club, and a type of dancing in those clubs.[11] By 1964, discotheque and the shorthand disco were used to describe a type of sleeveless dress used when going out to nightclubs.[11] In September 1964, Playboy Magazine used the word disco as a shorthand for a discothèque-styled nightclub.[11]

So disco was born from a deficit of genuine live music during the Nazi occupation. Ahh, that seems so correct to me. It’s the d.j. when you can’t afford a full band at a wedding. So be it. The problem was that in the 1970’s this substitute became the preferred medium. Imagine if restaurants stopped serving real sugar and only provided sweetener substitutes. I suppose many folks would celebrate the artificial sweetener’s dominance. Not me, there is that chemical after taste which your brain detects as foreign and carcinogenic. Oh, but I may be getting carried away with hyperbole. Let’s cut right to the chase— ladies and gentlemen, Miss Donna Summer. 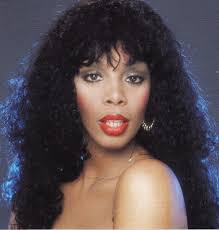 Hot Stuff, Love to Love You Baby, Last Dance, and She Works Hard for the Money, are some of her hit songs. Danceable and forgettable, even though their hook lines would get in your brain and cycle like upbeat Abba injections of euphoria. And she was pretty. There you go– disco in a nutshell. Once you get started, Lord it’s hard to stop.
But all that was all so 40 years ago. Why bother with it now? Let sleeping Jack Russell Terriers lie, right? No. Like all fashion statements, this one will be back again, if it is not already woven into the media culture the same way that biologically altered food is in our food supply. Divas continue to pop up on the airwaves, crashing into whatever cultural barriers are left. And in this sense the term divas goes for men, women, and the undecided entertainers among us. Whether it’s sex or drugs or a combination of pleasure seeking hedonistic behaviors and attitudes, it’s here to stay. Disco dis and disco dat. Disco here and disco dere.
A movement must be for something and not just against something, however. In this light I suggest a pursuit of organic music, real stuff made by real people on real instruments for real audiences. Really. I don’t think warning labels for disco are necessary, though I am not totally against a helpful statement: “Warning: prolonged exposure to this synthetic cacophony has caused hysteria, lasciviousness and madness in lab rats and Bee Gees. Listen at your own risk.” Where is the FDA when you really need them?  At a convention in Vegas listening to disco under a strobed ball on the government’s dime.
Okay, I am sounding like Mr. Grumpypants, I know. I’m almost finished with this rant, so please humor me a bit longer. When your life is nearly over and you look back on what you did and didn’t do, will disco be one of those heartbeat moments that shine across the decades and generations? If your answer is yes, then I want you to listen to Love to Love You Baby alone on an elevator for 12 straight hours with only bathroom and water breaks until you say no.