The ghost grip rises northward out of my upper spine and starches all those supple muscles in my neck that had found warm relaxation at the beach last week. It’s just a single stressful day of the routine, and already the coffee, tension, and focus are pulling together like rusty marionette strings to make my head nod, smile, turn, and tilt. EEk!! It’s a bad trade, but the ratio seems to be 1:8, one day of work cancels out 8 days of relaxation. I’m trading dollars for pesos. Why?  Why do we do this to ourselves?

For achievement of one sort or another, so I am told. We build resumes of rigidity.  And when we’ve had enough, we brittley retire from the brutality. Once we are fully, hopelessly  wooden boys, we finally soften up in preparation for the end– the letting go of doing and the embracing of being.  My retirement song will be “I’ve got no strings to hold me down, to make me fret or make me frown. I had strings but now I’m free, there are no strings on me.”  Pinnochio, where are you, man? I went to school. I worked like a donkey. And I behaved badly here and there. Now I want to be a no strings, fleshy, real boy again. If you can’t make it, Pin, at least sent Jimney Cricket to talk me down. I don’t want to live in a whale’s belly any more.

My peer group met at my house this morning for French toast and bacon, grits and coffee. (Grits come with or without you asking. It’s passive-aggressive Southern Food Fascism, an informal way of taxing and testing your guests. How will they deal with the grits? Like John Wayne or Lil’ Wayne? It’s a Rohrschach Test with boiled ground corn.) Whipped cream and blackberry pie filling were available along with organic maple syrup. Our topic for discussion?  The end of life, the inevitable decline of aging. For a field trip Dave 2 suggested that we visit his retirement community, which he just loves. A breathless lack of enthusiasm met his suggestion. No one wants to plan his own slow, fragile demise. So we don’t. We read about it in our book– Atwul Gawande’s Being Mortal. Lots of good stuff in there for other people to use. But Lordy, not me. I just hope to die in my sleep… long before I lose control of my bodily functions and mental capacities. I want autonomy, firm flesh and freedom till the end. Problem is, we don’t get much of a choice in the matter.

I think it was Woody Allen who said he wasn’t afraid of death, he just didn’t want to be there when it happened. Me too, Woody.

According to Gawande, your best insurance policy against winding up in a nursing home is having a daughter.  Fortunately I have three. I hope at least one of them will keep me out of the nightmare of institutional living if that’s where I appear to be headed. Like most American men, I don’t want to become dependent, or more dependent than I already am. It’s a strange dynamic, this aging process. In a way it’s like playing poker with Death. You win almost every hand when you are young and can’t even imagine losing one day. As you get past 50, though, you notice the face cards aren’t coming your way very often. Forget about aces. You’re pulling a lot of 5’s and 8’s. No straights or flushes either. You fold more often and win seldom. Some folks call for a new deck at midlife. They quit their job or marriage, their church or their kids. Wanting a new purpose, passion or cause, and facing a barren horizon that is too much to bear…  they demand, “Dealer, new cards!!”

The Dealer chuckles at these naïve players, neck deep in mortality. “SNot that easy, Boys. Mortal means ‘ssssubject to death’… not if but when. SSSSoo, how about another hand, eh?” Eventually everyone learns that the Dealer always wins. Since this is the inescapable end of the material world story, what are you doing with the time we think is still available? Are you making a tighter, tougher resume? Are you tightening your abs and working a veggie diet?  Lots of antioxidants?  Good, good. But are you adding value to the time you are reupholstering?

Back to Pinnochio. He lost his strings when he explored his freedom. He blew it. He skipped school and fell for Stromboli, the bad dude with the traveling carnival. Every time he lied, his nose grew, which is not a bad adaptation. [Imagine if our politicians had this adaptation. They would be upright swordfish. Reporters would be skewered nasally in press conferences. Congressmen would skewer one another at hearings as they lied back and forth. In presidential debates, the guy with the longest nose would be declared the winner. Chris Christie wouldn’t have to lie about Bridgegate any longer because New Jerseyites could just drive back and forth to Jersey City over his nose.]

Anyway, Pinnochio found his soft flesh after saving his woodcarver father Geppetto’s life. Just when you think old Pinoak had drowned after the awful whale Monstro chased him, he is transformed into a real boy by the blue fairy. Boom! Why? What’s the Pinnochio secret?  Sacrificial love, my little wood shavings. He gave his life for his father, his wooden life, that is. Old Pinoak stopped lying and started using his noggin to rescue Geppetto and the cat. 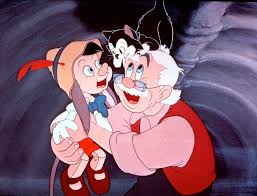 As a result the Blue Fairy returned to change his splintered wooden heart into one of flesh. It almost sounds like a religious parable, eh? Sacrificial love actually transforms the giver and receiver. Like Shakespeare said about Mercy…

“The quality of mercy is not strained;
It droppeth as the gentle rain from heaven
Upon the place beneath. It is twice blest;
It blesseth him that gives and him that takes:
‘T is mightiest in the mightiest; it becomes
The throned monarch better than his crown”

Sacrificial love may be mightiest in the weakest and most vulnerable, folks who have nothing to spare but find this gift in the empty cupboards of their lives. So, I’ll play another hand with Death. He can have my sawdust. I’m taking my fleshy heart with me. 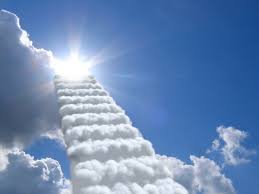