Well, we could all use a little cheering up, I suppose. It’s the tail end of the year, and like the last hour of a party, there’s litter on the tables and smoke in the air. Some tidying up will be needed in the morning of the new year. The floors are tacky with spills, and the 90 minute soundtrack of 2014 has repeated for the third time. Cheetos and pistachio shells are scattered about. Time for cheer, oh yeah. 2104, you were something.

So let me tell a positive story that inspires you, blognados. Perhaps you will draw a deep breath and relax, even move boldly through the unknown of 2015. Back  in time, back before all the electronic stuff came to market, there were simple toys for simple children. Balls, dolls, train sets, bicycles, sling shots, and board games. It was basic stuff that came from catalogue stores or was placed on something called “lay away” by parents who paid weekly on their Christmas gifts. Credit cards had not come to dominate and seduce the multitudes yet. The J.C.Penney and Sears Roebuck catalogue came to everyone’s house through the mail back then in late summer. And housebound mothers and kids would flip through the pages anxiously, hoping for the magical goodies on the glossy pages. These catalogues were not ever considered junk mail, no. They were encyclopedias of materialism, promising transformation of dull lives into something else, something more, nearly divine, museums of grandeur. Who could argue with avocado and teal blue combos?

One Christmas I ordered a Lone Ranger makeover kit that would transform me from a suburban proletarian’s third son into a masked hero who sought no fame for his sacrifices. It was more than I could have realistically expected, a double holster with two plastic cap gun six shooters, a hat, and the black cloth mask. All worn over a pair of jeans and a western shirt. Man, look out bad guys, cattle rustlers, whiskey sellers, bank robbers, and claim jumpers! Justice was about to be unleashed!! The entire transformation package may have cost up to seven dollars in real 1960’s money, which is the equivalent of  about $500 in today’s money, I think. I hoped for and imagined all my heroic adventures would play out in the narrow woods that were left undeveloped by the first wave of urban sprawl builders. We had forts made of sticks and leaves and sometimes a sheet of plywood over a hole. A kid with a mask and two  plastic pistols would rule that no man’s land. I touched the page of the catalogue and wrote down the order number code, offering hopeless prayers heavenward, “Oh God, please let me be a Lone Ranger hero. Amen. I promise to behave and only to kill bad guys who deserve it.” 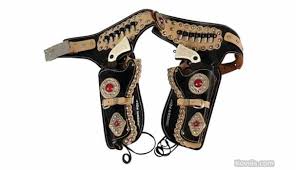 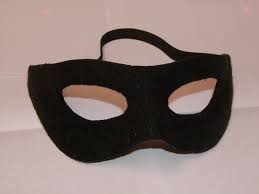 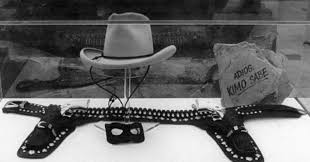 Weeks went by. The weather got colder. Anticipatory anxiety grew. As the Christmas decorations were brought out again, I could taste the courage rising in my belly like acid reflux. I licked my wind blown, chapped cowboy lips as I practiced my Lone Ranger lines, “A man’s gotta do what a man’s gotta do.”  “I was just doing the right thing, Ma’am. No need for any compensation… but shucks, if you want to kiss the Ole Lone Ranger here on the lips, that’d be okay with Tonto, I suppose.”

I had no horse named Silver. He would only have gotten caught up in the briars of our narrow woods and there would have been zoning problems with a horse in fenced suburban yards. I never reached for that impossibility. Where would I park him at night? What would I feed him?

There was also that kid four houses down on Virginia Hills Avenue who dressed up as Zorro and just schwashbuckled his way into our violent war games. I would have to shoot him with the cap gun to teach him not to bring a mere sword to the field of battle. No one knew his name, though I think it was Wayne Newton and he eventually moved to Las Vegas. See the resemblance? Zorro unmasked.

Christmas decorations were up in folks houses, the old fashioned basic bulbs that were hot and big and bulky, which we would unscrew and throw into the street to hear them pop as they exploded on the asphalt. Whoops! That is outlaw behavior. I’d have to shoot myself with my longed for Lone Ranger pistols. I vowed to change and leave the dark side once I got the Lone Ranger kit for Christmas.

Until then I figured I had to get all my antisocial activities out of my system. Since it snowed that year early we boys naturally made snowballs and hurled them at cars from hiding places where no one could possibly identify or catch us. It was so much fun to bombard a car or truck as it pulled down the street. If you had enough arc on the snowball, you could plop it down almost vertically on the target vehicle. Then the driver would be clueless where the snowball had originated. Rookies simply hit the vehicles broadside and were easily apprehended by angry drivers. It’s hard to run in the snow.

One time I recall bombing a station wagon at night. I stood behind this enormous oak tree and tossed my slush sphere as the car drove along Kings Highway at a good clip. Boom!! It was a great strike and I felt so safe and invulnerable in my bad spot. Why even the Lone Ranger wouldn’t be able to find me…but the man in the station wagon pulled around and came up behind me as I was ready to throw another snowball. He had on a dark ski mask and scared the moisture out of my throat. He put me in his car next to his kids in the back seat. I was a criminal. He yelled at me. I was dead road kill. He asked me where I lived and I told him.

I was ready for the gallows when he told me to get out. Maybe the Lone Ranger would swoop in at the last second and shoot the rope I was to be hung by. Suddenly the station wagon pulled away in an aggressive act of grace. I deserved a bad consequence, but that dad let me go. Maybe he had been a car bomber in his childhood. All I know is that I didn’t need the Lone Ranger kit any longer. I had met and been delivered by some masked man already.