When I was a middle school teacher, there were times when kids would sit with blank papers in front of them during the time allowed for writing their  little assignments, usually the world famous five paragraph model. “I don’t know what to write” was their typical response to any prompting. I’d say something like, ” Just push your pencil and see what you get. You can always rewrite it later; that’s what editing is about.” Somehow these kids thought that making a mark on paper was equal to opening negotiations with an international extortionist. (Mind you, they had time to brainstorm and outline prior to writing. We did follow a logical  process.) If they left the paper blank, so it seemed to me, then they would not have to edit or rewrite or share with anyone. The case was not that they had nothing to share; nor was it a case of double negatives; rather, they lacked trust and enjoyment in the communication business.  Once the trust hurdle was cleared, we could have some fun with the written word. Sometimes, though, it felt like I was delivering breech babies…”Okay, I’ve got a foot. Pull. NO! That won’t work. It’s Stuck! I need 100 cc’s of vodka, stat!! Uh, that’s for me, Nurse.”  At other times it was more like Caesarean deliveries in a school desk. “Okay, you have a wooooord… is that THE? Now what would be a good word to follow THE? People? Good. Which people? The people around you. Alriiiight.” Whew! chipmunk brain surgery.

Occasionally I need to apply the same push to my own writing. “Just start, Senor Burrito, and you can always edit how you like later”, I tell myself. “Push it”, like Jimi Hendrix playing live, with no thought about the mixing and editing later. Just jam now. (Forget the fact that he was on several hits of acid.) If I approach topics like an obsessive-compulsive safe cracker, I’ll never write anything. It’s not poetry here, bloggeisters; it’s just a brief communion of your mind and mine, as scary and unholy as that may be. I appreciate your courage in investigating the tapestries and caves of my meandering mind. I hope that you find at least one redeemable sentence woven in the tapestry, or one cave painting that intrigues you. After all, I have trusted enough to open the negotiation of communication, knowing full well that there are risks on-line in our sue-happy country.

My attorney daughter cautioned me not to use last names to avoid torts. (I told her I didn’t personally know any torts, then she clarified this is not a slang term for the dull witted…otherwise I would qualify. Rather, it’s the name of  litigations in civil court, aka, lawsuits for money, not to be confused with tortes, flourless cakes in nice restaurants.)  Thus far I’ve only referenced one dead rock legend by last name, so I think I’m safe, though safety is not my goal. But torts are not either, especially since the word comes from the root “tort”, meaning “to twist” from which we get ….. contort, extort, distort, and torture. You get the picture.  These are not happy verbs to experience, I know. Also, I want to assure you that, unlike my hero Jimi, I am not under the influence of any hallucinogenic drugs at the moment. Still, I think it would be prudent if you signed a release of liability at this point, indicating that  reading beyond this sentence implies that you are not damaged or annoyed by the content herein.   Signed___________________________ and dated_____________________. Thank you. And while you are up, would you pass me that buttercream torte on the counter?

I’d hate to live in bubble wrap with a helmet, steel toed boots, an air bag safety vest, a harness, skateboard pads, and a mouth guard just to avoid the risks that come with living. Risk free living is not living, in my book. Every once in a while we have to push our limits, fears, and comfort zones if we are to grow ourselves. If not, we live defensively, doing the same safe things over and over, setting up like thick green Jello in the back of the fridge. I’m not saying that you should go skydiving in the nude over Vegas, but mix it up at home, take a small chance on a regular basis.  Sure, it’s messy making changes. Just ask Chris…uh, the governor of Jersey. When you rip down that 1980’s wallpaper of  ducks and cattails, it’ll be pure chaos for a short while. However, once the new sagebrush blush and tangerine paint go on and you rearrange the lighting and furniture, the ducks and cattails will only be  faint background quacks and meows. This is what I tell myself when I contemplate renovating our finished basement. The temporary trauma will not override the lasting tranquility of calming colors on the walls. I say, “Push against the torts. Out with you, rabid Torts! If you don’t like it, sue me.” 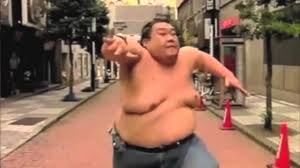 Push the Jello uphill, Blog Nation. Step it up on the treadmill that is everyday life or be hurled backwards onto the floor of Planet Fatness. Some days it feels like the cholesterol clots are chasing us on the treadmill; they are flying monkeys released by the Wicked Witch who wants our cool running shoes. But press on. Soon I need to give my annual blood work for my doc to take roll of the good and bad cholesterol twins and the evil  triplets, those triglyceride demons. I feel like Alex Rodriguez about to be busted and put on medication probation. I’m pretty sure that the increased diet and decreased exercise regimen that I have been on since October will produce some spoiled fruit in my circulatory system. A pineapple clog, a bushel of triglyceride kiwi, a watermelon-sized aneurysm somewhere. Yup. So I must keep on pushin‘ my jello uphill. I’ll see you at the top of the slop.