A glorious November  deteriorates into soggy goose down weather that slowly slides down the smoky gray skies. So long seventy degrees and no layers. Hello icy drizzles. Light the wood stove and keep it lit from here on. Seal up the windows. Get those stinking non functional Christmas lights up as the temperatures exit the fifties. Oh crap! they just blinked out again! Wait for a day in the thirties in January to take it all down again. Farump! Happily if not completely, the yard work is over till spring. Where’s that snow blower?  Better yet, where is that ticket to Tucson?

A few distant booms preceded the alarm this morning. It’s the first day of buck season in PA, a holy day for a million soggy pilgrims in the woods and fields of our commonwealth who worship at the Whitetail Temple of  Boom. Soon deer carcasses will be festooning  fenders and decorating truck beds as the happy hunters return home tonight. The grisly job of butchering lies ahead after the meat seasons a bit. Eventually it will find a way to the dinner table as burger, jerky, roasts, and steaks. Heck, I made a venison meatloaf yesterday that was la- la- la- luscious. The meat was either two or four years old. I couldn’t tell. It was deep in the frosty freezer and unlabeled, but still better than store bought beef. Mine were the only hands that ever touched that venison. Think about that as you eat your next burger served to you by a sniffly waiter at a greasy spoon.  “You want to thooper thize that, thir?” 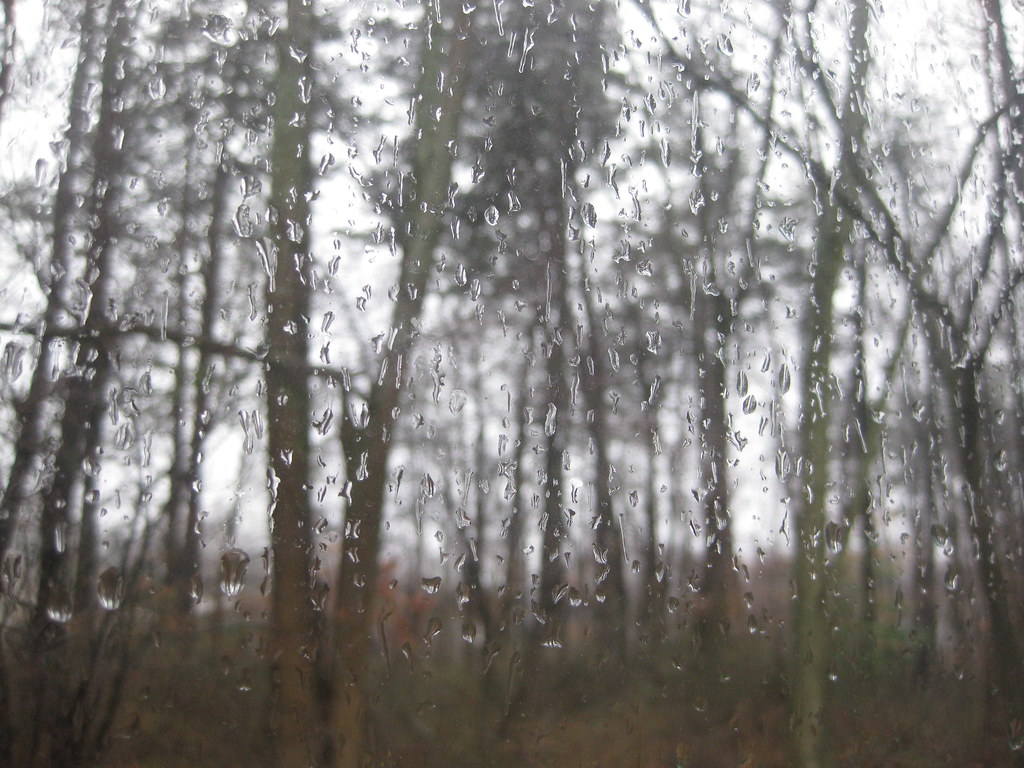 I won’t be venturing out to kill Bambi this year. Standing in the rain last season doused my hunting flame for a while. Misery– cold, dark, chilling wet forest stagnation is all I recall from the time spent under an umbrella screwed into an oak tree. It felt like my penance for killing two deer over the past three seasons. Not that God minded; I respected and enjoyed those creatures. They did not die in vain nor did they die in rain. But no matter, this pilgrim is staying home for the duration. I can entertain myself with the written word, and cut and paste pictures like I do. It lasts longer than deer meat and usually does not smell so gamey. Go ahead and sniff your screen. Now smell some fresh kill venison. See what I’m saying?

But, gather round my chilly children and hear the tale of Drizzle the Whitetail Rain Deer.

Twenty five years ago on this very day a solo buck wandered into the old J.C. Penney store at the Southgate Mall, which borders the Conococheague Creek at the south west corner of Turtle Town, just above the flood wall. This deer was not shopping on Black Friday, folks. No. It was in rut, I think, and picked up the smolty unmistakable scent of Doe-Eyed Danger that Doris Muhlenberg wore at the perfume counter that dark and tragic day. Some shoppers say the buck saw a deer mannequin in the Christmas display window; others reported that it was being chased by a Tibetan yeti. (Of course, that was Fred’s belief. He’s got the bipolar bear complex.) Me, I’m going with the perfume theory. Crazy, I know.

Unreliable witnesses claimed the buck bolted up out of a patch of woods near the creek bed behind the strip mall, and pursued a woman in a three quarter length suede coat and black heels, later identified as Doris Muhlenberg (59) of 612 Franklin Street, apartment B.

Some say from a distance she looked like a doe prancing on her hind legs that day. She apparently walked or pranced briskly toward the shopping center, unaware of the buck bounding across the parking lot in hot, frothy pursuit.

Accounts differ after that. Some say the buck waited for the Walk sign to light up, and others claim he bounced right across Washington Street in one clickety jump. In either case, he landed in front of the store. He either waited for the electric door to open or blasted his way through plate glass, depending on which histrionic local you spoke with. What all agree on is that this buck had a constant post nasal drip so heavy that he left a puddle of drizzle on the pavement beneath the overhang. As the buck snorted and sniffed and cavorted after Doris, other witnesses unfamiliar with deer in the wild, believed he had allergies or a bad head cold. Possibly a chronic sinus infection. Thus the name Drizzle was given to him, and unlike most facts from that day, it stuck.

“After I put my lunch and coat away, I came out to the perfume counter station across from Ladies Intimate Apparel and Hardware Department. We have some size 3x ladies in town who require steel reinforcements in their bustiers. Oh, listen to me. TMI, as my grandkids say. Anywhoo, as I was settling down on my counter stool, I heard an ungodly commotion coming from the front, so I did. And what do you know? A drippy-nosed six point buck was slipping  and sliding on the tile floor.”

Hunching down in a whispery voice…

“I sensed I was in danger, so I crouched down a tad, keeping constant eye contact with the beast through the display case. I grabbed an atomizer full of Chanel # 5 in case he charged me. I read somewhere that deer hate aerosol sprays. I made peace with my Maker and braced myself for the most bizarre encounter of my life… worse than my honeymoon with my first husband.”

“That dang Drizzle was dazed from all his blood lust and perverting about. He sniffed and started trotting a bee line towards me. Suddenly, though, his front legs slipped out from under him and he crashed into an end cap full of ladies bras, several of which got tangled up on his antlers. I’ll never forget being eye to eye, no farther than you are to me, and seeing a Bali bra label at the base of his rack.It was a living lingerie nightmare, let me tell you.”

Just then, Chief of Police Cecil Smack came rushing in brandishing his 9 millimeter sidearm. What a sight he was! I knew I was gonna live through this bralopalooza after all. So I stood tall to watch it all go down.”

“Out of nowhere Leonard Finkle, the maintenance guy who’d been moping all morning about having to work on the first day of buck season, came roaring out of Men and Boys with a box cutter in his hand. He leaped onto Drizzle and began to hack at him with the box cutter. Dang fool didn’t have the blade out, so all he did was ride the deer around Ladies Intimates and Hardware until poor Drizzle collapsed in a heap under Leonard’s weight. ”

“Later on the Game Warden come in and tazed old Drizzle and hauled him off to a petting zoo in Altoona. Truthfully?  I think the warden ate Drizzle for Christmas, but I can’t prove nothing. Any ways, the reporter and photographer showed up and I was in all sorts of newspapers, people wanting my autograph and deer meat. Some “friends” asked for the soiled bras, I mean, if they was gonna throw’m away any ways, and all. I mean they give me cup size and style just in case. You know what a good bra costs these days? Quite a few bucks, heh, heh…. That there is a joke. Y’all can laugh now.”