Two themes have emerged thus far– the coffee summit and the cross country hitchhike. Which way to go? Both, neither, either. The coffee shop has its daily visitors and the daily babble. I have to be careful about revealing Joel the lawyer, whom I recently consulted on the inheritability of coffee reward points. I have been after the barristas to transfer (other customers’) unused coffee reward points to my account. Some folks  have accumulated 600 plus, which means that they have spent $600 without cashing out from the rough and tumble game of caffeine consumption. I use my points as I rack them up because I would not want to be hit by a truck and leave them behind, unknown and unused. Seems logical to me. Joel informed me the other day that coffee reward points are “intangible personal property that can be valued at current market value and indeed left in one’s estate, thereby also being taxable under the Pennsylvania inheritance tax laws” (since the coffee shop is located in Pennsylvania).  Which sure takes the fun out of it all. However, if one simply transfers these points while one is living, no taxes need to be paid. They are like coupons or discounted prices. It’s comforting to know useless information sometimes. You feel less guilty after forgetting it, unlike forgetting how to figure the area of right triangles or the other one that starts with iso–. I’m not going to look up the spelling at this moment. See how the fickle stream of thought meanders around, following the path of least resistance?

Returning to the summit would require examination and concentration; the shoulds and shouldn’ts would kick in. Getting back into the flow of the hitchhiking story would put me in Nashville after two days of standing around major highways and riding in a lot of Volkswagen Beetles. But I wound up in Nashville, 1978 and was exhausted. It was not the first night I’d pushed through without sleep, but it was the first one spent standing in the rain and dark along a highway. I found the Sam Davis hotel somehow. It was large and couldn’t have  been very expensive. I slept the night…it would have been Saturday, and got back on the road on Sunday morning.

Of course another gay fellow picked me up. He was 18 I think. I was 21. No, we didn’t get jiggified. He was leaving his boyfriend’s place and driving home to Arkansas, which is across the Mississippi River if you are geographically challenged. I can’t recall his name, but he was dejected to be leaving his guy behind and wanted to chat with me, I guess. He could talk and I could listen, so off we went. He rewound his entire  high school experience for me, including being outed just before his performance as leading guy in the high school spring drama production. The most beautiful and popular girl in the school, and his close friend, of course, played his leading lady.  They had to kiss in one scene and it was more than many in the community could endure. Somehow they adjusted the scene to spare the sensibilities of the Arkansas audience. His other stories have faded over time, but he was a nice guy. Before he drove north and I continued west, we stopped at a restaurant and, no kidding, he got his high school yearbook out of his trunk and we sat on his bumper thumbing through his recent glory days. No shock, no surprise this time. Just a lit up Southern young man who was excited to be alive.  Amen.

I think the next ride I got was with an oilman in his Lincoln Mark IV. He’d had so many heart attacks, he told me, that he could not fly in an airplane. As a result he drove hundreds of thousands of miles in luxury cars. “No one would believe the kind of miles I put on my vehicles, and I don’t tell them at trade in time either.” 600 miles we covered. He bought me lunch and just wanted to talk to someone. Told me all about his family. How he’d sold the family home after his wife died. His kids got so mad at him that he had to buy it back. He was ready to move on but they weren’t.  He told me some dark stories about the bottom of life also. I’ll spare you those.

Somewhere in Oklahoma, I believe, he let me off. I hated to get out of an airconditioned luxury car only to stand still and sweat by the side of the highway. But it had to be done.

One of my next drivers was a drunk man who stopped and asked me if I had a valid driver’s license. When I showed him my then valid Virginia license, he said, “Drive” and got in the back seat with his whiskey. I felt oddly proprietary and careful of the vehicle. I drove for two or three hours until our ways split. He told me to pick up an honest looking hitcher to replace myself. I did. After a brief interview, my replacement drove this pathetic man away into his blackout.

Two paths diverged in the yellow wood, and I, I took the one less traveled by.

I’m out there now. I told my adult daughters and my wife, meanwhile feeling like Cosmo Kramer in khakis– “I’m out there, Jerrry.”  “Yes, and only a thin layer of gabardine separates us.”  (Scrunched up mouth of disgust)

I don’t want to hurt anyone’s feelings, but you can’t stop being and doing so that you can live in fear of ever hurting another person on the planet. Every breath we take has consequences. Now do I wait and ponder the echo of my consequences around the globe, or do I go on living in a forward direction? Easy choice. I can’t picture the entire planet thinking through consequences somehow. My computer is using electricity that was produced by coal being burned. And the coal burned was a consequence of some primeval swamp material compacting and hardening over the millions of  years since then and now. No, it’s too much for my puny brain to conceive. Do you live in the here and now? Or do you live in the there and then? Worriers live in the future. Morosely depressed folks live in the past. Healthy folks live in the moment, where we are alive. Minutes ago we were alive. Minutes from now we will be alive. But our mind/body/spirit pulses in the now. It can be messy in the now, but that’s where the fun is. 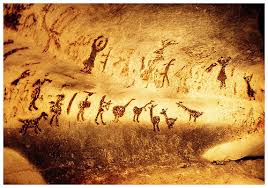 So now I’m getting suspicious queries about what I will be writing about. “Mostly crap that crosses my neural pathways”, I say. But I’m beginning to sense that some folks worry that I will out them somehow. Now, if I were that kind of guy, wouldn’t I have done so already?  I mean, why wait for technology to enable me to slander another person. I’m sure that even in cave paintings there are untranslated slanders like “Kong pees the bed” or “Beest sucks his thumb”. New meanness does not come from nothing. The same folks who slam others on facebook and texts in a previous life slammed their peers in slam books. Do you remember those from junior high?  A spiral notebook that had names listed and you would say nice or awful things under each name. Mercifully, they had a short shelf life ended by a teacher or parent snagging and destroying them.

No, I’ll not slam a flea here. There are no fleas here. Unless that’s a new term that goes with blogs, like “Oh, he’s just a flea on that blog.”

Something that may be interesting is that I hitchhiked across the U.S. in 1978 from my home near Washington, D.C. to Los Angeles, California. I had worked all summer between my junior and senior year of college and my girlfriend (later wife) was living in Long Beach,California. I guess I wanted to prove something to myself and save the airfare, an outrageous $125 each way back then. I bought a return ticket so that I could be on time for college, unlike my freshman year when I showed up a few days late for orientation and herbally disoriented. Anyway, that August I got a ride to the road nearest my parents’ house and stuck out my sign, “L.A.”  Herbally disoriented again. A guy I knew from high school picked me up and took me a few miles to interstate 95 South. He suggested that I break down my goal into smaller bites– Richmond, North Carolina, Raleigh, Tennessee, Nashville, etc. I thought he was brilliant and followed his suggestions. He thought I was brilliant for being so reckless to go off and thumb myself across the continent. Fortunately I was too stupid to realize the insanity of what I was up to.

Funny that 35 years later I can still recall some of the characters who picked me up. There was a disheartened young minister, he may have been a worship leader in a Volkswagen Beetle. It was immaculate and I knew better than to ask if I could smoke. Yes, I smoked a lot of cigarettes back in the day. They cost about $0.35 then. That is not a typo. Thirty five cents. At Sandor’s Bookstore in Richmond you could buy a carton for $2.00. Cancer cost less to acquire in the late 1970’s. The sad church guy let me off in North Carolina, I believe. He was kind but off somewhere in his own stuff. Of course, I was perfectly adjusted.

Later on, as I recall, a used car salesman from N.C. picked me up. He had a southern accent but explained to me that he was actually an immigrant from Northern Ireland, had come over as a kid. I’m Irish extraction but not too crazed about it. He dropped me off in the rain and dark and I stayed beneath an overpass on Route 40 all night. No rides. No one could see me.

At dawn a gay guy in a Volkswagen picked me up. He’d been up all night partying with  his friends and was on his way into the Great Smokey Mountains. It was just fine until he reached over and squeezed my noodle. “Surprise!” he said to me. Well it was a shock but not a surprise. “Just drop me off here,” I said. He did. It was the middle of nowhere in the early morning hours. I was a bit pissed off since I hadn’t slept and my noodle had been doodled without my permission or enjoyment. Which is something I might add here, I have had many gay guys hit on me in my life without any provocation or invitation from me. A mystery, my friend. I’m not homophobic just a bit skittish.

Well, this is as good as any place to pull over. I imagine that I’ll revisit this cross country journey on a later entry, but like the coffee shop, it won’t be finished anytime soon.