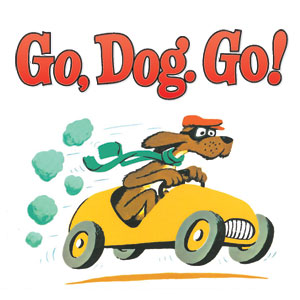 One of my children’s favorite bedtime stories was a simple book called Go Dog Go by PD Eastman. It was/is so uncomplicated and innocent, just like childhood should be. Dogs race around in cars and stop at this absurdly large tree canopy to party like wild dogs. Through out the nearly plotless story two dogs meet sporadically and the female asks the male, “Do you like my hat?” to which he replies, “No” and then they race off while the narrator says, “Go Dog Go”. Wonderfully childish stuff. The climax of the book is when the male dog finally says, “Yes” to the female’s last hat offering and they go together to the tree party. Silly, simple, unsophisticated. Only a child would enjoy such a book.

Singularly uncluttered illustrations left a lot of empty white space on each page so that the dogs in their cars were unmistakable. Lots of room too for a little girl with baby shampoo scented hair to lean against her dad and point to each silly dog with a tickled fascination. Which often led to a bit of real tickling and giggles. Sure, we know dogs don’t talk, drive cars or climb tall ladders into a cloud-like tree canopy to party, but we suspend some of what we know to sample little pizza slices of fantasy. Our little ones have less knowledge to suspend so it’s easier for them to fall upward into fantasy.

My grandbaby called me Dinosaur Grandpa recently during a Skype session. I didn’t catch the connection to any experience until her mom, my daughter, said, “Don’t you remember chasing Leah around the house at Christmas, pretending to be a dinosaur? You were going ‘Roar!! AAARGGGHHH!! Blaaaaaa!!’and crawled after Leah as she shrieked for her tiny life.” Well, yes I did, but I didn’t realize that would be a lasting distinction for her two months later. Makes you wonder about what the lasting impact of bad behavior would be on a little girl’s pure mind. (Scar tissue holds such children in thick bondage to past pains. Trust me on this one.) It’s a funny dance we do with our vulnerable ones who want to be chased and scared one minute and cuddled and reassured the next. Somehow, like coyote pups fighting one another in their mother’s den, our toddlers are hardening their knowledge of the big bad world, practicing safety and seeking security in fantasy play with trusted playmates.

The Wizard of Oz was a scary favorite movie for my kids. Watching as an adult is an entirely different experience than a five year old’s experience. The wicked witch was so real to my kids in their innocent worlds. They would curl up in a growing revulsion of Miss Gulch and then the Wicked Witch herself. Of course my girls identified with Dorothy and her magical ruby slippers, “glitter shoes” as my Jessi would call them. She had to have a pair of red glitter shoes. Once at church she tried to take a pair of gold glitter shoes off another little girl’s feet. Funny thing about those ruby slippers of Dorothy:  they protected her and drew deathly attention at the same time. Why is it that being a pretty girl with blingy shoes makes you both favored and targeted simultaneously? Not fair, but girls learn to harden themselves against the wickedness of the world. It’s not just in a movie.

Anne of Green Gables was a powerful series for me and my girls. Megan Follows stole our hearts along with all the cast in the Wonder Works tele-version of the classic series. We hated Rachel Lynde, the nasty nosey neighbor who warned Murilla  “orphans will poison your well”, planting the seed of doubt in stoic Murilla’s thinking. She mocked Anne’s red hair and lit her anger fuse. Quietly, though, Anne found comfort in Matthew, Murilla’s bachelor brother. He accepted and loved her, it was clear. My girls fell in love with these characters, and all of us wept when Matthew died in the story. This experience was not so much fantasy, though it was not real. Like some folks do today with Downton Abbey, we used to cancel competing activities so that we could be home on Sunday evenings to watch the next installment of Anne, our new best friend. We even once planned a trip that we never took to Prince Edward Island. It was just too expensive or we were too strapped financially. Oh well, I hope to be present with my granddaughter when she meets these lovely characters. Perhaps we will finally make it to PEI after all.

All three of my daughters became big readers, which pleases me to no end. Reading good literature is like crosstraining for your mind. You meet the most interesting people and places and time periods in novels. Whether it’s To Kill a Mockingbird, another dark favorite that pits childhood innocence against institutional adult racism, or Little House on the Prairie, my girls found enough reality traction that drew them in emotionally and intellectually to other times and places, hearts and minds. They will forever be different for the better because of these experiences. As good as the movies are, they never approach the novel’s glorious gift of a limitless imagination. In the safety of a book’s pulpy pages my girls could paint their own pictures of the awesome Laura Ingalls Wilder or brave Scout, creepy Boo Radley or wise Atticus Finch.

Here is my conclusion. It’s a beautiful thing to watch your kids grow in knowledge, wisdom, love and experience, from the simplest to the most complex levels.  I’d gladly sign up for those days again with the hope that I would be wiser, more loving and patient the second time around.  I guess that’s what grandparenting is all about, though. You get a do over with the next generation…

In the mental health business hope is an indicator of health, optimism, and faith. The opposite of hope, hopelessness, is an indicator of bad times and often correlates with suicide attempts. “I’ve lost all hope” is a pre-suicide cliche. So by extension hope correlates with life, and hopelessness with death. I’ve known a few unfortunate souls who suffered from intense chronic pain. Not surprisingly they thought of death as a reasonable pain killer. They did not want to die, just to end their suffering. They had lost hope of their pain ending; lost faith in their painkillers; and decided to kill the pain receptor, i.e., themselves.

It’s a hard sell to try and persuade someone back into their pain wracked body. It’s comparable to encouraging a battered spouse to go back into his/her marriage. I would never try to persuade a battered spouse to return to a battering partner. Yet, I would try to walk and talk a chronic sufferer back into their pain dump. Not because I am a cruel sadist and derive pleasure from another’s pain. No, my position is more rooted in the value of life and,of course, the hope of cure. I believe in better times and have walked through many dark valleys with folks who were ready to cash out their chips. So far, no suicides have occurred on my watch. None of the credit belongs to me; all of it belongs to the concept and practice of hoping for better days, and the strength of the hoper.

Years ago I recall a conversation with my one good buddy who was swatting at the flies of suicide in his mind. “Been this way for fifty years, Man. No chance. Gotta face it.” I argued a bit that the past is not the ruler of the future. He disagreed. “The past rules. No, once the bell is rung, you can’t unring it.”

“True, but you don’t have to march to the same cadence to the end of your life. What if Act Three of your life is all about redemption and joy? You’ll miss it because you bought the message of the first two acts of your life.” Fortunately for him, the love of his life was just around the corner. He is one of the happiest guys I know now, except when he bosses me around and I won’t cooperate.

Today I am back in Arizona with my daughter and brand new granddaughter, Leah Grace. It’s a surreal experience as I feel and hear my granddaughter’s little kitten breaths while she slumbers on my chest. She curls her little hands together and clings like a baby possum to its mother. The circle of life is complete, and something very satisfying is rising up in my core. I suppose it is joy. Eight pounds of gentle quiet joy. She resembles her mother whom I can barely remember cradling in my arms 26 years ago. The old photos show a svelt young me with full black hair and big 80’s glasses. Wow! A full generation has passed. Back then I am sure I hoped and prayed for a healthy and wonderful life for my baby at that time, Grace Marie. My wife and I were so grateful to God that we could have another child after losing one in 1984. We hoped all the more because of the deep pain we had suffered through with the loss of baby #2, Lisa Ellen. It’s funny: you don’t hope for what you have. Hope is the thing that keeps you going when you are at the bottom of an abandoned well, calling for help, hoping a Good Samaritan passes by. You don’t practice hope if you are securely standing beside the well. Still, I hope and pray for this precious child, that she will have a healthy and wonder-filled life. I can realistically hope to hold her child one day, God willinng. I can cast my hope out there another 26 years… I’ll be 82 and teetering on the Grand Canyon of life. What a blessing that would be!

For the moment I will content myself with hope for a good night’s sleep for her devoted mother and father.  Ever wonder what your life would be like if your kids were your parents? In some faint reflective way, they are. The DNA may commingle and dilute, but there are traits of my parents in my children. My wife is adopted, so the trail ends with her. My folks were odd people, let me tell you. They married late for their generation due to the Big War. My mother wrote to many GI’s during WWII because it was the patriotic thing to do. Plus, there weren’t many men available in Boston in the early 1940’s. My dad wrote back. He returned in person and hung out with my uncles. Amazingly none of my uncles was killed or injured in the War, though one was held for two years in a Nazi prison camp. Think he needed some hope?  And his family who faithfully sent him packages that he never received. Hope might have been an empty box, but it still contained a loving spirit if not cookies and bread and chocolate. However, what if he had received every package sent and never made it home? That would have been the empty box, the coffin. Instead he was liberated and made it back to Boston. Bob fathered nine kids, by the way. He lived a full life and was much loved when he died a  timely death a few years back.

The old saying goes, “Be careful what you hope for. You might just get it.” Well, thus far my life has exceeded my hopes and dreams, and there is more ahead. Amen.