Big people cast long shadows in life and even longer ones in death. Big personas are not perfect; rather, they’re landmarks for observant travelers who find existential confirmation from these monumental persons. Like a huge white oak tree in a vast field or an enormous saguaro cactus in the sprawling desertscape, great people become compass points for the rest of us to navigate life by. There is a “foundness” in our fondness for these characters. We feel safer, stronger, and braver in their presence, whether it is through direct contact or not.

George Nakashima was a great man who spoke through wood. His biography/philosophy of life, The Soul of a Tree, is worth reading for inspiration. He was a man of many countries and influences, and ultimately a great artist. An educated American architect with a master’s degree from M.I.T., nonetheless he was interned for part of WWII because he was also Japanese.

“Nakashima’s home, studio and workshop near New Hope, Pennsylvania, was listed on the U.S. National Register of Historic Places in August 2008. One of Nakashima’s workshops, located in Takamatsu City, Japan, currently houses a museum and gallery of his works. In 1984, George Nakashima had the opportunity to purchase the largest and finest walnut log he had ever seen, and sought to use the immense planks to their fullest potential. He dreamed then that if Altars for Peace were made for each continent of the world, as centers for meditation, prayer and activities for peace, the world would be a better place. Over the past decade, his furniture has become ultra-collectible and his legacy of what became known as the “free-edge” aesthetic influential.” Wikipedia entry. 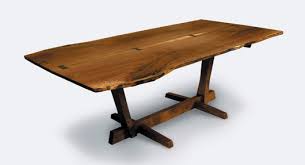 Simple beauty. He worked with the wood’s natural knots and burls.

Pete Seeger is a legendary figure who outloved his enemies. His banjo motto said, “This machine surrounds hate and forces it to surrender”.  He maintained a singular focus for nine decades of life, always affirming life and freedom. I can’t even begin to outline the achievements of this great man. Funny how he was a peacenik and a believer in the oneness of humanity, and the sanctity of nature and human life. He used words and music like George Nakashima used planes and chisels.  Maybe you’ve heard a few of his most influential songs.

“Whose Side Are You On?”

“Where Have All The Flowers Gone?”

It’s ironic that he withdrew from Harvard after failing a class. Consequently, he went on the road to educate himself about American people, music and life. Like Nakashima, his life was interrupted, twisted into knots, thank God.  He did not have his  freedom taken from him; instead, he grabbed for it and gobbled it down. 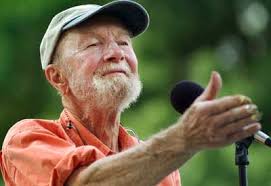 Like Nakashima Pete Seeger’s patriotism was tested. He was a communist at one time, which sounds odd… an American Communist.  I believe he evolved into a humanitarian and left the political theory behind him, outliving Joe McCarthy at the House Un-American Activities Committee and J. Edgar Hoover at the FBI. Great men have plenty of haters, but heroes must have villains to overcome, right? John Lennon’s line, “Time wounds all heels” comes to mind. Whose legacy is worth reading now? Not the haters and fear mongers. Who winds up on the right side of history? You don’t know until it gets here. Still, some folks seem like clairvoyant soothsayers. Perhaps that’s because they hold to truth and beauty. Their view of the future is not so different from the best of the past.

Mark Craver was my friend from high school days. He cast a long shadow in many lives, as a student, a friend, a teacher, a writer, and just as a human being. His nickname from the days of Lew Welge, Sam Ray, and Jim Wilkie was “Burly”. I think Wilkie tagged him with that name. Funny that the concept of burls fits well in each of these guys’ lives.

“A burl is a tree growth in which the grain has grown in a deformed manner. It is commonly found in the form of a rounded outgrowth on a tree trunk or branch that is filled with small knots from dormant buds.

A burl results from a tree undergoing some form of stress. It may be caused by an injury, virus or fungus. Most burls grow beneath the ground, attached to the roots as a type of malignancy that is generally not discovered until the tree dies or falls over. Such burls sometimes appear as groups of bulbous protrusions connected by a system of rope-like roots. Almost all burl wood is covered by bark, even if it is underground. Insect infestation and certain types of mold infestation are the most common causes of this condition.”  Wikipedia entry.

So, if you are following the analogy, Blogestations, things of beauty are born out of deformity, dormant buds, crushed dreams, even malignancies. If you’ve ever seen a good burl in the woods, it resembles tree cancer. Yet, this is where wood artisans find the material for gorgeous swirls and crazy patterns in their work. It’s hard to work on a lathe when the grain cyclones through a hunk of hard wood, but that’s where the jackpot is.

Mark absorbed pain, I think, just as he absorbed knowledge and beauty. His photographic memory contained many unforgettable uglies right alongside sterling moments. Mark speaks in a low voice in my memory banks. He died in his sleep ten years ago. I recall the memorial service at George Mason University. Black, white, Asian, Hispanic, academics, young, old, bikers, fishermen, farmers, men and women, straight and gay, artists and audience were all there, maybe 400 folks who loved Mark. On the drive over to his sister’s house, which was further west, I drove into the glorious winter sunset hoping it would not set, that the darkness would not come. Like Dylan Thomas’s voice urges his dying father,

Do Not Go Gentle Into That Good Night

Fellas, that light does indeed die and we all go into the good night.

Thanks for your legacies.