Like a picture frame, a border line holds an edge and lends definition to something, maybe a garden bed or a basketball court. The line highlights where something ends and something else begins. In the therapy business  borderlines are personality disorders of the first order. The term refers to an imaginary line between psychosis and neurosis. It’s a sanity stripe that some folks dance on all their lives… one foot taps out a rhythm on the scales of depression and anxiety while the other foot occasionally stomps on wild, scorpion delusions.  It’s an awful mix of pathologies that usually results in erratic and fragile folks who are hard to spend any time with, who at the same time are desperately clingy and needy and fear abandonment. Their gasping struggle to hold on to others results in being abandoned over and over again. For them impulsivity is irresistible. Flailing in the deep end of Responsibility’s pool, they drown their rescuers like mythical sirens. Suicidal thinking and attempts go with that awful fence post place where borderlines sit painfully on broken glass, chewing strands of barbed wire licorice. Broken relationships and deaths are hard for the average person to endure, but for the borderline these are exquisitely excruciating exercises in existence. Imagine a swamp that rests on top of a volcano that sits on the San Andreas fault during monsoon mudslide season. The potential for bad things to erupt and splatter is very high.

I’ve read that borderlines are terminal two year olds in their temperament and folks who have no skin– only nerve endings. Everything hurts… the wind, the news, the silence, the drama, the weather, and especially boredom. I’ve also had limited experience with a few. Whew!! Exhausting. And you may be thinking “Oh, sure. How much harder can they be?”  Well, if you’ve ever been in a plane where the oxygen masks deployed, it’s like being in that crisis mode more often than not. You don’t want to get on such a fragile crazy plane again. It’s easy to become a hostage of a terminally flailing victim. Black holes in the social universe that suck up resources and potential disappears… the Bermuda Triangle of mental health… fear, rage, shame, guilt, and chaos swirl there.

BPD’s are forever bored and crave excitement the way that television executives crave market share….”Look at me now, and now, and how about now?” Attention is their oxygen. Endless selfies and soulful despairings attach to their ever changing FB pages. Theirs is the most exceptional life struggle of all time, dontcha know? It’s no surprise that BPD’s are overrepresented in the performing arts and sports and politics where praise and adulation are part of the payment system. And that would make sense because of the intense attention that comes to performers, athletes and politicians. The problem arises when the curtain descends. How on earth is the BPD affirmation junkie gonna get his/her fix in an empty theater, studio or stadium? Oh, I know, go stir up some drama– have a hit of this or spend that or have an affair with someone else’s spouse. And do it now because patience is no virtue in the BPD world. It’s just someone denying an irresistible treat that is deserved somehow.

Do not attempt to be rational with a border line. Their landscape is one of intense superhighway emotions without logical rest stops built in. In fact, there are no off ramps, only breakdown lanes for runaway vehicles. Boundaries do not exist in BPD land: time, privacy, private property, legal rights, social appropriateness, personal space, etc. are always negotiable items. And they promise they’ll never call in the middle of the night again or beg for money or sex or time. Rules, structure, discipline, truth, etc. are all wiggly concepts that can be manipulated by their unrelenting breathless neediness.

“They love without measure those whom they will soon hate without reason.” Thomas Sydenham. 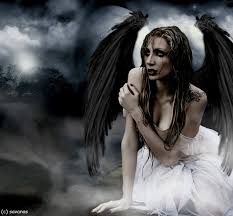 Fallen angels, maybe. Passionate without limits…. Destruction seems inevitable, and there is a higher suicide rate for BPD’s, 8-10%, to be sure. How do you treat these shape shifters with compassion and integrity? I’ve been to personality disorders workshops before and heard that it can be done successfully. But it takes twice a week sessions for at least two to four years. That’s a lot of investment on both sides of the couch. Who has that kind of patience/ time/ money/ or insurance? How do you do therapy with an enraged jealous polar bear at the equator? Always it’s life at the extremes.
The poster girls of BPD do/did have the resources, but I’m not sure that they made it through unscathed if at all. Here are the top seven celebrities who supposedly have/had BPD–Angelina Jolie, Lindsay Lohan, Britney Spears, Amy Winehouse, Courtney Love, Princess Diana, and Marilyn Monroe.  Maybe you noticed that three of these ladies met untimely deaths. Swirling tornadoes of hot and cold emotions roiling across the flat lands level anyone and anything that opposes them. Succubi.

Truly, it’s hard to comprehend such things unless you have experienced them firsthand. And then, since they won’t obey boundaries, you double down on yours, trying to teach them patience or just ignore their drama. Most of the time it is just drama, over blown and exaggerated, full of adrenaline. But there is always the suicide cloud that floats in the background, the ultimate trump card that holds folks hostage. “Don’t abandon me like all the rest have!” Fair? Not at all, but it’s one of the few tricks the borderline knows, emotional extortion. Problem solving interpersonally is not a strong suit.
So we carry them like a pie that didn’t quite bake correctly and we call it cobbler, served in a bowl. We supply the shape for the collapsed boundaries of self. Maybe there never were boundaries to begin with. I don’t know. You and I look in the mirror and see ourselves each morning; borderlines see no one looking back at them; that’s all.