Johnny is our dog, a black and white border collie/collie mix we rescued six years ago. He is technically my daughter Jess’s dog. His license says she is his owner. They are more like soul mates, if you ask me, but there was no such box on the license application to check. He is sweet natured and rarely barks; usually just one bark to get us to let him in. ( Jess does not bark at all, fortunately. That would be awkward in the ladies room or at hospital visits.) He’s getting old and often slides back down the stairs instead of bolting up them as he once did. Oh, Gravity, thy cruel force sucketh!! Now in his dotage, he skitters about on the hard wood floors like a pair of drunken elderly tap dancers with hip replacements– “tick, tick, tack, tick, tack, ticky, ticky, tack, tack…” throughout the night, all freekin’ night,  if we don’t gate him in the carpeted hallway. Sometimes his hips just give out and he falls down. Still, he’s a great dog and our world is a better place because his tuxedoed hair balled self is in it at knee level. This morning he just posted himself between my legs and stopped. I could not easily turn left or right. I’d have to step forward or back up to go to work. I swear he was a ninja instructor in an earlier lifetime, but he’s not talking. Ninja national security. He knows too much secret stuff… like how to eat my wife’s chicken chili lunch out of her lunch bag without a noise.

She had the audacity to yell at him for pilfering her lunch bag after she’d left it on the floor. That’s entrapment if you ask me. I promised to get him a good dog lawyer and maybe he’d get off for good behavior and time served.

Over the past two years he has had some sort of skin allergies that caused him to scratch endlessly, leaving his skin raw and oozing. Our vet determined that Johnny was allergic to his food. Now keep in mind that Johnny supplements his diet with used facial tissues that he pulls out of the trash and anything else his big snout sniffs out. He would scale Mt. Everest for a piece of bacon, I think. Anyway, the vet suggested that we serve Johnny the special dog food that is only for sale at the vet’s. Wow, how convenient is that? I mean the food is right there at the cash register.  And it only costs $100 per big bag. Okay, Johnny is worth it, no doubt, but come on, man!! What a squeeze play. 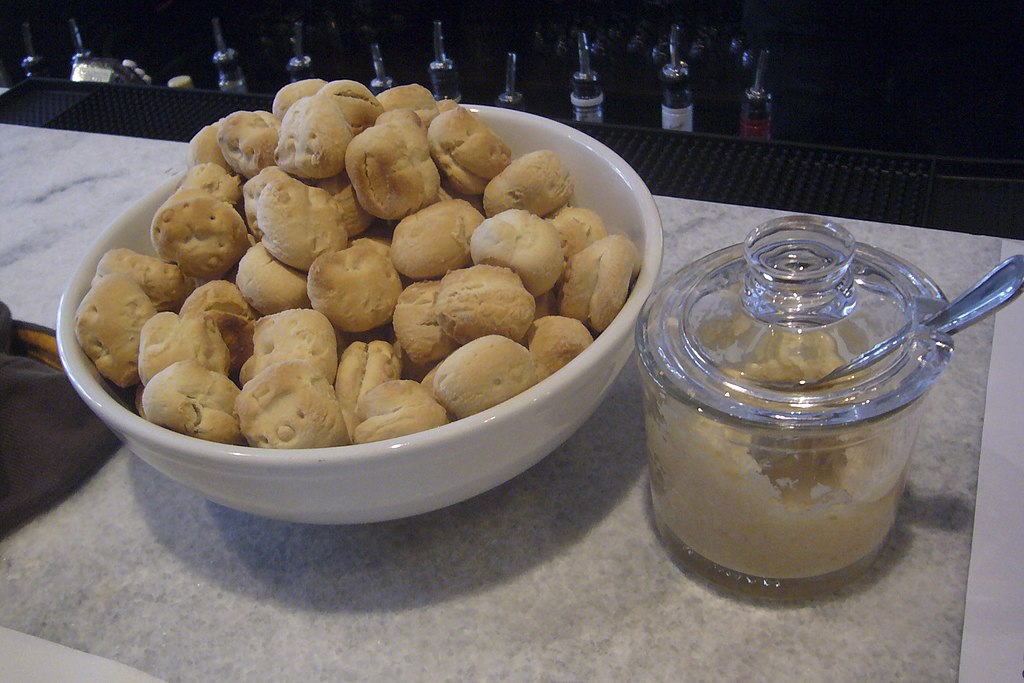 So the new food looks like oyster crackers that you put on soup. Flavorless puffs of hypoallergenic nothingness that crunch and fool your taste buds that something good is happening between chews. Johnny did not approve. He sniffed at it with contempt and looked deep into our souls with his wise brown eyes…”how could you do this to me?” he seemed to ask. My clever wife squirted gluten free beef broth on top of the oyster crackers to bait and switch Johnny into eating. “You just need to fool him to get started and then he keeps going.” Her Cleverness seemed to be working until the day we found out the rest of the story.

Johnny has never been the neatest eater, so when some of his hypoallergenic oyster crackers began to appear in the toilet downstairs, I thought little of it. “Oh, he must have spilled some and Her Cleverness swept it up and emptied it into the toilet.” It did seem odd but hardly memorable, so I flushed the evidence of a brilliant passive-aggressive plot. Later I would learn of the intrigue and skill behind this pale flotsam.

One morning while getting dressed, my wife exclaimed, “What’s this?” as she scooped stale morsels of hypoallergenic dog oyster crackers out of her sock drawer. She emptied all the contents on the floor. Maybe a cup’s worth of crunchy tastelessness spilled out from the socks. “Don’t look at me! You’re the one who feeds him that cardboard crap diet. He’s mad at you.” 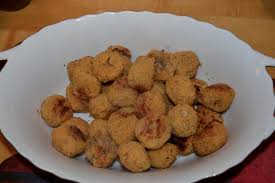 “No. How could he open my drawers and dump food in?”

“I don’t know, but there is no dog food in my sock drawer, which is at the same level as yours.?”

Opening her underwear drawer, “Oh, Johhny!!” Again, about a cup of oyster crackers had been methodically dropped among her underthings. It was hysterical, although I’m not sure my wife fully believed that I was not a co-conspirator. Honestly, I wish I’d thought of it to begin with, but I didn’t, so there it ends… I hope.

About a week after  Her Cleverness cleaned out the sock drawer again; it was filled with another cup of crunchy nothings, more silent ninja passive-aggression whispers from Johnny. “Leave the gun; take the cannoli”, I pictured Johnny alone all day muttering lines from gangster movies as he implemented his dastardly dried goods export plan. He is good. First pulling the drawer out. How?  Then going to his dish to get a mouthful of dried mucus pellets. Next, carefully carrying the despised cargo to its rightful place, in a sock or underwear drawer, snickering at his dark deeds. Finally, using his unnaturally long snout to close the drawer. Brilliant. I wondered if he sat back and savored the cold bacon taste of canine revenge served deliciously late. 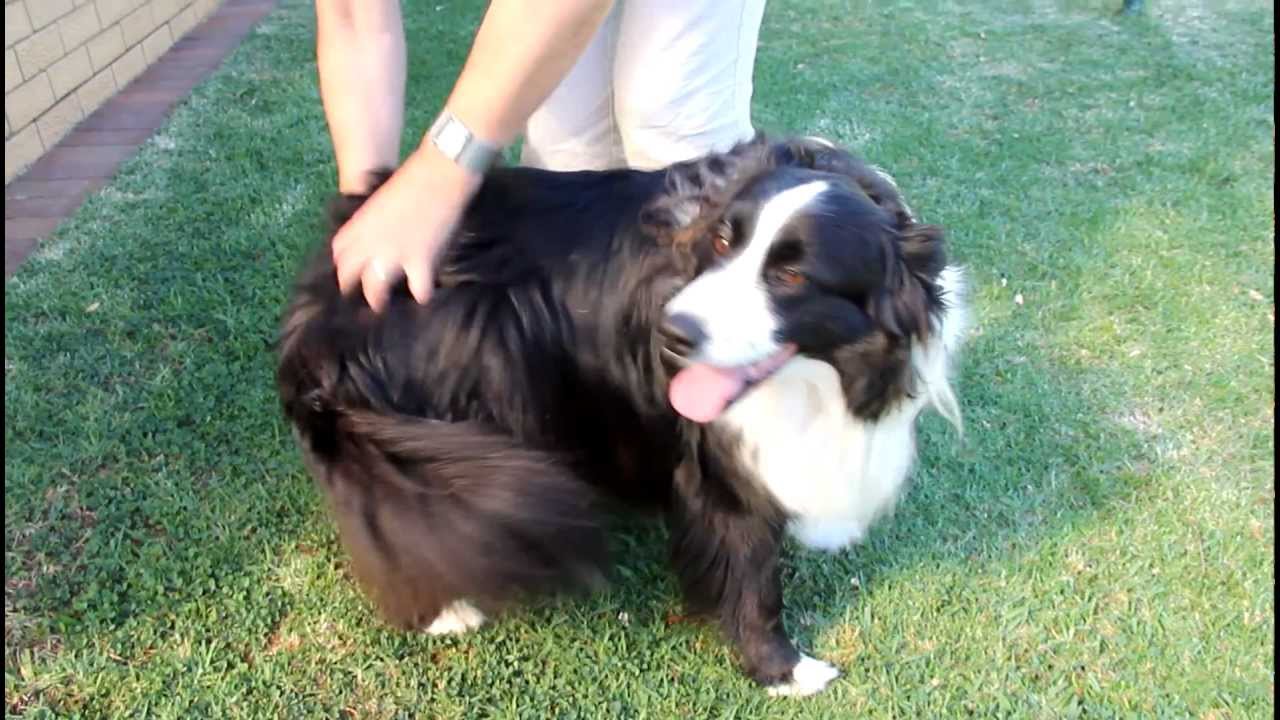 After careful analysis I figured that the spilled oyster crackers came from sloppy transportation from bowl to drawer. How many oyster crackers fit in a dog’s mouth at one time? I can only guess. How many trips did it take? We’ll never know. He’s keeping the code of silence, omerta in Sicily. Johnny is not Pavlov’s dog, nosirree. He gets bait and switch tactics, my bloguertos. I just hope my wife learns soon before I wake up to a severed horse’s head or a package of fish in newspaper. “Her Cleverness sleeps with the fishes.” 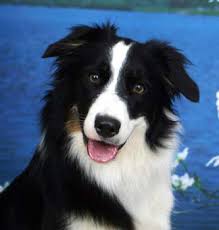 Johnnie is our mixed collie/border collie rescue dog. His nose is a full collie length, which means it comes into the room a couple of beats before the rest of his skull. Border collies need to be employed. They can’t sit around all day like a bassett hound can. Johnnie checks out every noise or wrinkle in the routine. He goes crazy when the phone rings, shoving his long snout into your butt crack as you try to walk gracefully to the phone. By the time you get to the phone you feel violated. Not enough to call 911, but enough so that you can’t focus on the phone call for one long irritable moment.  Meanwhile Johnnie feels that he has done his civic duty and is very excited about having snouted you.

When the doorbell rings, all hell breaks loose. Johnnie barks at full voice and begins running madly about the house. He gets psychotic about meeting whoever walks through the door. It’s an ordeal that lasts several minutes as he huffs and puffs and strains to meet and bond with the newcomer. We rescued him when he was 9 years old, so we take no responsibility for his weird behavior patterns. He was an “as is” deal, no warranty or pedigree. But he is a beautiful keeper, a gentleman. When he lies down, he crosses his front legs. He sighs as he drops his head down onto his black and white legs. He is always on duty, however. Always on the alert, canine homeland security.

When I let  him in the back door downstairs each morning, he walks by his water and food bowls. He walks across the room and up two steps into the next room where he stands until I pour his food in his dish. When I walk away, he approaches. We did not teach him this behavior; he taught us. He’s formal like that.

Johnnie appears to have obsessive-compulsive disorder. He counts heads and then checks and rechecks his math.  My daughter claims that he is making sure that all his sheep are in the pen. This includes the aloof cat Annie, who also lives with us. When she is outside, Johnnie will look at her through the sliding glass door and come get one of us to let her in. It makes you wonder.

We had another border collie, a purebred male named Nick. Got him as a puppy. He was bad and I have to accept responsibility for his badness since we got him as a puppy. Nick was mostly black. On moonless Monday nights he’d pretend that he had to pee. Once outside he’d slink away and melt into the darkness. He’d go through the neighbors’ trash until dawn, like that rat in Charlotte’s Web, when we’d find him under the pole light in our front yard. On many occasions I stalked him with a flashlight and a bad attitude. I couldn’t see him but I could hear his toenails clicking across the road or driveway. When I’d spotlight him, he’d give me the “Oh Crap!” look. Even then he wouldn’t come  automatically. He’d slink out of arm’s reach, knowing that I was gonna smack his furry butt.

We tried to contain him. I bought and installed an underground fence with shock collar. It worked until it didn’t work. Nick was too smart for containment. He walked around the yard listening to the intensity and frequency of the shock warning beeps. I watched him on a few occasions when he would sprint and leap across the wire at a weak signal spot. I’d make a point of dragging him back across the wire slowly so that he could appreciate the shock he had just subverted. It did no good. He was the Bobby Magee of the hound world.  He had to be free.

One year it snowed 30 inches, just enough for Nick to walk freely across the wire below. Who’d have thought about three feet of snow thwarting an electric shock when installing a wire on a hot summer day? Oh Nick! fourteen years of his escapades. He snarled at and bit a few folks, mostly those who had it coming. He was a rascal that we loved. He could have been the inspiration for the tee shirt that says on the front,”Jesus loves you…” and on the back, “but nobody else does.”

Once we had some pet finches that flew around our house.
They’d flit from one window to another with unbelievable acrobatic skill. You guessed it: Nick had to herd them. My daughters thought it was great entertainment watching him zoom at floor level as the birds flew back and forth from room to room. That is, until Nick launched himself with one giant leap across the couch and through one of a pair of matched lamps. It was so crazy that you just had to laugh.

Yeah, an expensive rascal who took us to court on my birthday, but that is another story about the Wicked Dog Warden of the West.