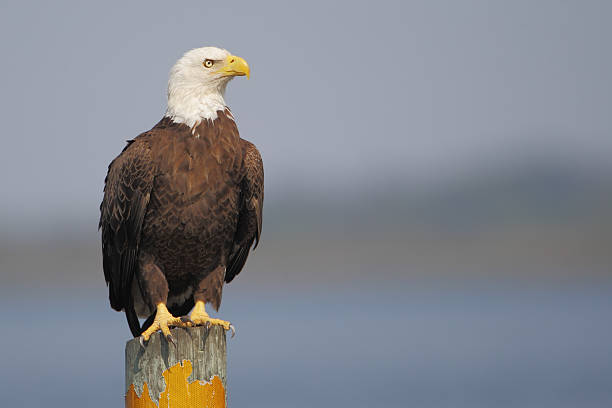 Yesterday on the way in to my office, maybe 8:00 a.m., I noticed a large bird on top of one  power line pole at Norlo Park, to my left as I drove west on Route 30, the section that is elevated where a stream runs underneath. So I was pretty high up, not 8 miles high like the Byrds song that was censored in the pornographic days of  Vietnam, but a good twenty feet above the parkland. This large black bird had a pure white head, so I knew it wasn’t one of the ugly turkey buzzards I see occasionally waiting for carrion carcasses along highways in central Pa. Nope, this bird was fit and trim, poised, and majestic. Yep, an honest to God bald eagle. Not a raven with a styrofoam cup in its beak, like Ed from my peer group reported mistakenly identifying as a bald eagle, to his wife, another avid birder, recently. Wow, that’s as bad as misidentifying one of your grand kids at an amusement park. He might have to turn in his Audobon Society card or at least do some supervised probation, a minimum of six months I would guess. “It’s a blue jay, Bob, but look at that goldfinch over there!”

“Ouch. Bob, why did you hit me with that truncheon? I thought we were friends.”

“Unauthorized practice of birding, Ed. Get in line, man. We cannot be friends until you are rehabilitated.”

The majestic eagle perched facing west, with an unobstructed view of groundhogs and mice below. I could not tell if it held olive branches in one talon and arrows in the other. I was past in a flash and did not turn around to take a picture. It’s actually not my first local experience with a bald eagle. I saw a pair flying way high above the reservoir at Lone Pine Dam. And then one flew over head at my buddy Gary’s farmette while I was hunting the wily groundhog. Still, it was a majestic moment to see the symbol of our country in the wild. 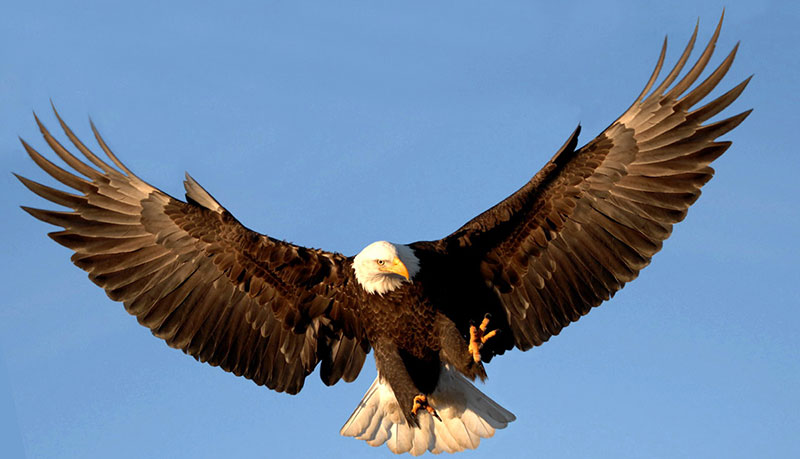 Reassuring, too. You see in eighth grade I had a melodramatic science teacher who proclaimed to us naive students that “the Great Lakes are dead”. He was a real downer dude, as were many of my teachers in the late 60’s and early 70’s. One English teacher told us about the young men who went blind on LSD from staring into the sun without sunglasses.  He failed to mention that they were also naked and got a nasty sunburn in paler regions, but no matter. They were blind from sun spotting and could not see how awfully red and shiny their hineys were.

I pondered the great bird all the way in to my office. Pleased that our environment is now more suitable for sustained eagle population growth. Back in the hinterlands of my memory I recall DDT affecting bird shells and endangering many birds in the 1950’s and 60’s. Rapid micro research led me to Rachel Carson’s Silent Spring, c. 1962.

THERE WAS ONCE a town in the heart of America where all life seemed to live in
harmony with its surroundings. The town lay in the midst of a checkerboard of prosperous farms, with fields of grain and hillsides of orchards where, in spring, white clouds of bloom drifted above the green fields.

Then a strange blight crept over the area and everything began to change. Some evil spell had settled on the community: mysterious maladies swept the flocks of chickens; the cattle and sheep sickened and died. Everywhere was a shadow of death.

There was a strange stillness. The birds, for example— where had they gone? Many people spoke of them, puzzled and disturbed.

No witchcraft, no enemy action had silenced the rebirth of new life in this stricken world. The people had done it themselves.

Now sure enough, the one negative article on banning DDT came from none other than Fox News. But what else would you expect from perverted peddlers of poison pablum?

Anyway, I’m pleased that the symbol of our country is healthy in fact. However, I am concerned that our country is in a helluva mess these days. The Environmental Protection Agency that protected the bald eagle is being dismantled, no, imploded by the fox in charge of the hen house. Replacing one environmental rapist (Scott Pruitt) sheep turd with another, slicker goat turd (Andrew Wheeler) seems like a great way to continue the dynamiting of the agency. Nothing like a coal lobbyist to run the EPA. Next we’ll get a former KGB agent running our CIA. HMMMmmmm. Let me think about that for a second. Is this Helsinki meeting with Putin a job interview?  Or a surgeon running HUD, whoops. Already been done. But, let’s see, a totally unqualified politically connected billionaire’s wife running the Dept of Education. Check for Betsy DeDunce. Or a physician buddy bragger with boundary issues to run the Veterans Administration.  Oh, you get the point. How many clowns can get into the mini-Cooper at 1600 Pennsylvania Avenue? 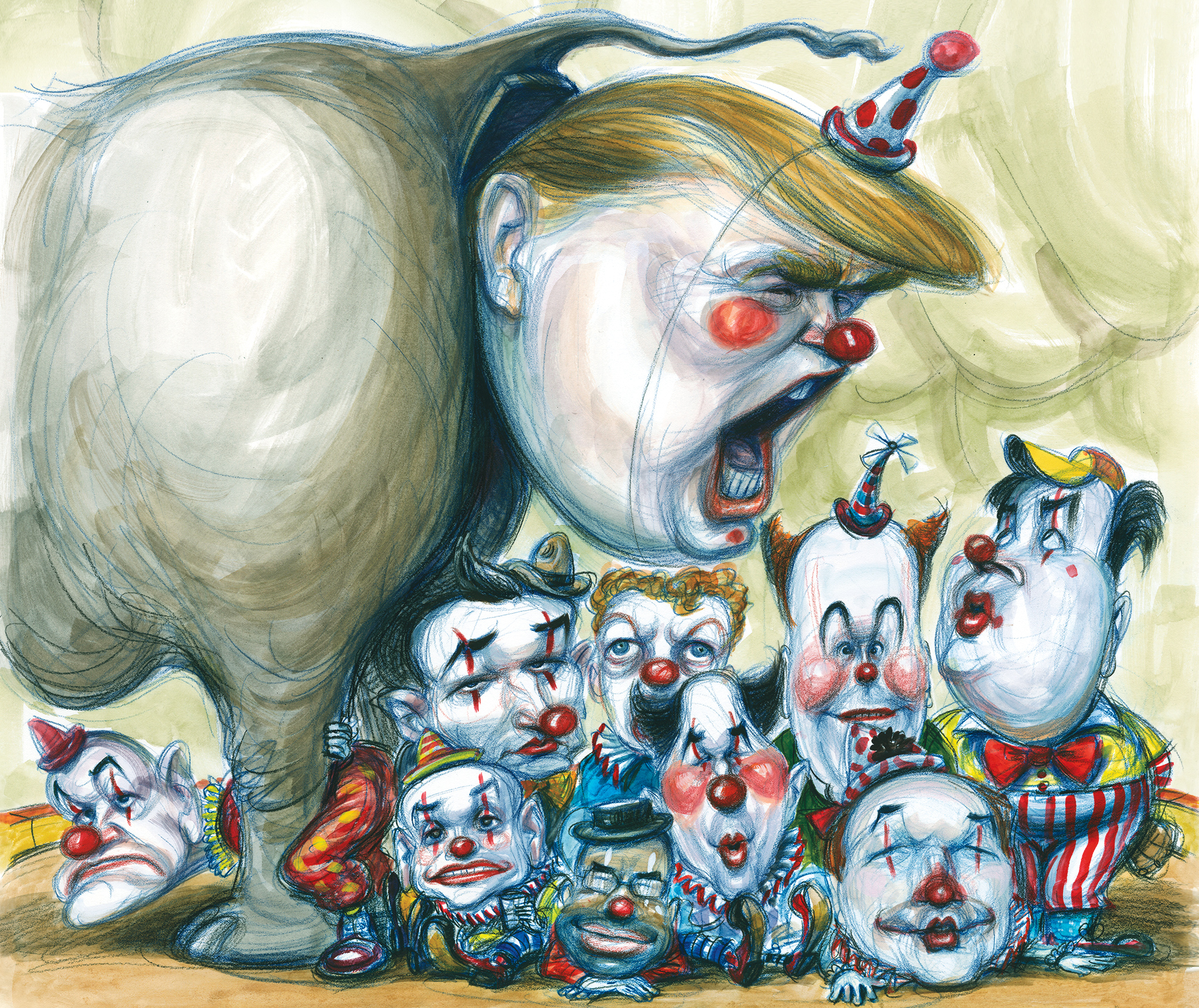 Irony gets old after a while. An unexpected, contrary outcome that is often humorous, isn’t humorous after too many repetitions. A. because it is no longer unexpected. B. it’s too damn serious to be funny.

Isn’t it ironic that Rick Perry runs the Department of Energy, the dumbest guy who ran in the Republican primaries? Isn’t it ironic that Ben Carson’s only qualification for running HUD is that he lived in public housing? Isn’t it ironic that Elaine Chao is married to old Senate Majority Leader Mitch McConnell, and that she has to provide security for old Mitch when hecklers harassed them in public?  Isn’t it ironic that the HHS Director Alex Azar, grandson of a Lebanese grandfather who emigrated to the U.S.A. from Lebanon, speaks so blithely about modern immigrant families being carelessly ripped apart?

Maybe our eagle should look away from this latest shameful poison, aka, DJT.