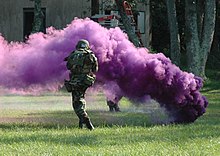 These days there is much smoke and haze without any visible fire, though the old aphorism reminds us that “Where there is smoke, there is fire”. However, aphorisms are not always true; they are simply handed down as generally true statements, most of the time, depending on circumstances, might be useful, maybe not. Don’t take my word for it. In all disputable cases, Google it.

If you have ever seen a smoke grenade or flare, a fog machine or dry ice vapors, then you know sometimes there is smoke without fire. In fact these are intentional devices that help obscure troops in danger or define a landing zone in combat. Fog is used to set a mood in stage productions or movies. I’m not telling you anything new here. Smoke, fog, and haze are used to manipulate the observer away from what is in some cases; in other cases, the smoke delineates a safe zone for a helicopter to land safely.

Smoke grenades are used for several purposes. The primary use is the creation of smoke screens for concealment and the signalling of aircraft.

My regular readers already know where I am heading. I don’t need to signal them with smoke and mirrors. Our Smoker in Chief is at it again and again and again, like a madman 5K powder race organizer, blowing smoke everywhere to create a screen of plausible deniability or a cloud of impenetrable chaos wherein everything is obscured and therefore suspect. Traction is lost in the distortions of distraction. Truth is intentionally covered in contorted mists and dusty doubts. Trust is intentionally dissolved according to the KGB dictator playbook. Then, in the midst of all this dissolution, an authoritarian despot declares martial law and uses the Constitution as toilet paper.

distraction, noun, a thing that prevents someone from giving full attention to something else.

You see, traction means to draw or drag something along. A tractor does this on fields until it gets stuck in a slippery swampy spot. Then the tractor is dis- tracted. No matter the gear or the size or psi of the tires, it merely spins in the lowland muck. The wet ground cannot support the weight of what lies floundering above it.

Some will look at this image and see Trump, stuck in his greasy lies. Others will see Mueller and the Deep State wading knee deep in conspiracy. You are free to project whatever meaning you like. I’d like to look at irrefutable facts first.

All politicians have practiced the art of lying until they get caught, at which point they lie about their previous lies or take issue with the tone of the interviewing journalist. Eventually they default to “no one is perfect” or “politics is a rough and tumble business”. Never admitting fault or offering apologies.  The great deceivers go the extra mile of conspiracy theories to wiggle out of tight spots. Nixon was “practiced at the art of deception” to quote Mick Jagger. He created the infamous and mythical “Silent Majority” whose mandate he pretended to protect in 1968 until his resignation in disgrace. His trick was to turn the media’s focused attention away from the anti-war protests and the illegalities practiced by the Nixon Administration and on to this stable conservative group of patriots who were remarkably mute. He spoke of law and order and deep patriotism, pre-chewed pablum for mass consumption, so easy to thoughtlessly swallow.

Magically Richard Millhouse Nixon was the mute whisperer. Only he could channel the silent messages sent into space by millions of mute Americans. And surprise! They all supported his agenda. Surprise! What an amazing revelation from the rabid anti-communist who slavered at the back of Commie Hunter, Joe McCarthy. Joe liked a good conspiracy theory too, and he didn’t mind destroying lives in the process. He knew and taught Nixon that fear is a tool to maintain power.

Bill Clinton developed “a vast right wing conspiracy” theory to explain away his lechery legacy. Hillary ran point for him, pathetically in the end. However, with enough manipulation of fog and smoke, anyone can look like Superman. [This video clip is actually Ed from the loading dock with CGI clouds racing over  him. Cool, huh? Don and Darwin did that down in graphics in thirty minutes. He is actually standing on a milk crate with a cape. Those guys are wizards!]

We live in a precarious time when the cry of fake news is just as loud as real news, maybe louder. It’s up to the conscious citizenry to be able to tweak out truth from all the competing voices. How do we know what is true? Well, so often we don’t immediately know and therefore have to weed through competing narratives to arrive at what we believe is true until it is verified indisputably. We need critical thinking skills to ask questions that can deconstruct the tone from the rhetoric from the proposed facts. We can use logic and experience/history to check the facts. What we can’t do is rush to conclusions, which is what the lying car salesman wants us to do…”Hurry up and sign at the X down on the bottom. My manager might change his mind cuz’ you are stealing this car, Buddy! It’s the end of the month and the quarter, so we’re letting them go for cheap. You lucked out today.”

So much smoke and so many mirrors. What’s real and what is a reflection of reality?  You don’t know until you reach for a glass of wine and hit the plate glass mirror. Doink!

What’s true? We don’t know all of the truth. We do know some Trumpisms have been proven false.

The Central Park Five were guilty without a trial and therefore needed to be executed.

The Deep State FBI planted a spy in his campaign.

There was no collusion.

Smoke. No fire, Don. No matter how many times you repeat your lies, they remain lies. They can’t burn true because you have sucked all the oxygen out of the lab, and there was nothing of substance to ignite.

And what’s wrong with a little pathological lying, you ask? The horrific consequences.