“Cliches, Anyone? Two for a dollar. Get you some red hot clichés. Right here. Buy one for your girlfriend, Buddy.” I have many well worn phrases and stories that I’ve passed out in therapy sessions like old buttons that fell off some threadbare pants or an ancient stringy sweater. Some are my own fabrications in the truest sense. I made them up, I think. In an old post, 205, I mentioned the turtles, coke machines and ducks analogies/parables that have come to me in sessions, figuratively speaking, I mean. Animals don’t make therapy appointments. People do. All sorts of people, and I have to try and figure out how to connect to their pain using only words.

One time I recall a guy telling me that he felt like a man with a knife in his heart. “I’m a dead man walking. See, if I leave it in, I die. If I pull it out, I just die faster.” He was an overly dramatic convicted drug dealer in the county jail waiting to go up state.   I processed his powerful image and thought there ought to be an answer in metaphor land that could solve this bloody morbid riddle. Hmmm. It dawned on me that if one pulled the knife out ever so slowly, allowing the wound to  heal every millimeter or so, that in metaphorical theory physics, one could pull a knife out of a human heart without death resulting. I offered him this solution. Fortunately for both of us he accepted it in theory. In practical terms, however, it would be difficult to get dressed daily with a knife handle sticking out of your chest. Then there’s the dry cleaning bills. And the jokes…”Ed, you look stuck.” “Yep, I just can’t get a handle on this thing.”

Other clients explain dysfunction in their lives with vaguely broad statements like “I’m a people pleaser. I’m a peacemaker. I avoid confrontation.”  Word play helps here, so I’ve found. Not to be cruel, but I point out honestly, “You know I’ve noticed that people pleasers are never pleased. Why is that?” “Cuz we’re too damn busy keeping everyone else happy.”  In a similar manner I’ve been known to say, “Peace makers are never at peace, you know?  They’re always shuttling about making everyone else comfortable, carrying the mail back and forth between two or more pissed off parties.” Well, you’d think that I shot the Pope. “So you don’t like peace, is that it?”  “No, I believe in peace based on truth and transparency not a peace that is based on not hurting anyone’s feelings.”  Ohh!!!   And to the avoiders of confrontation, I share, “If you avoid anything long enough, do you know what you get?”  “What?”  “A _______Void.”  “Truth, Brother. Hard as a kidney stone. Amen.”

Time and water and mood states work well on a spectrum.  Huh?  Time exists in three general concepts– past, present, future. Water exists in  three states– ice, liquid, and steam. Moods exist in shrinking depression, flexible adaptation in the moment, and in expansive anxiety. Interestingly enough, depressed folks tend to move slowly and perseverate on their frozen pasts. Healthy people move appropriately in the flowing liquid now, where healthy life is lived. Anxious folks live in the what if future as they come unglued and scream out gaseously like superheated teakettles. They bang against the windowpane of tomorrow trying to avoid their present emotions; while their depressed first cousins soak in ancient ice baths. It’s only the present folks who can breath freely and move and feel genuinely.

I remember a woman who tried to stop time. Her husband died suddenly at 42, leaving her a widow mother of five children. Shock and grief overrode her reality. Understandable, right? I mean after an emotional tsunami, what else do you expect? She developed a coping strategy based on fantasy, magical thinking really. If she did not change anything in her house, if she hoarded everything, then maybe her husband would come back from the grave one day and just resume life as it was in 1972. Believing this myth was less awful than believing the waterboarded truth that she was a widow with five young kids depending on her to meet their endless needs. No furniture could be moved, no walls painted, no appliance changed out. Obviously this myth was unsustainable, but like any good cultic belief it could be edited as needed,  and  it was. The organic parts of her life continued to grow and decay despite her fervent worship of the myth. Kids grew up. She ticked on like a broken clock whose hands could only stutter in place. She stored her wedding ring in a soup can that innocent cleaners took to the dump.

Irvin Yalom wrote a book called Love’s Executioner. He suggested that it is the role of a therapist at times to execute love. Now there are two or more meanings for the verb execute but not for executioner, the noun, i.e., the killer. Who wants to tell a nice widow mother of five that her husband is never coming back and she needs to find another way to do life? Like the drug dealer above, this honesty would be a chef’s knife through her weakly beating heart. Sometimes the disorder is kinder than the cure, though both are deadly. 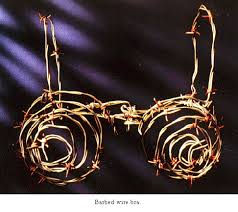 I knew another woman who was so bitter about men who had hurt her throughout her life. Her solution was bitter isolation in a bunker lifestyle. A vicious guard dog named Sarcasm patrolled her property day and night. “Bitter Acres. Go Away!” her sign announced to visitors who never came. Listening to her strategy of eking out a miserable life till she died a miserable death, it occurred to me that bitterness is like a barbed wire bra worn to defend against potential perpetrators…but the only one to be hurt for sure is the wearer of the contraption. “That’s easy for you to say. You were never raped by a relative, were you? And you don’t have to sit across the holiday table from him every Christmas and try not to vomit while he spouts his Christian platitudes and conservative right wing politics.”

No, thank God, all I have to do is try to meet the survivors at the bonfire where pain and grief and worry are incinerated. When the dead are too many or too big to be buried, a fire of bones is in order.