I’ve had numerous clients over the years who have complained that they cannot cry or sustain weeping if they ever do have tears. What’s up with that?  The problem is not a lack of sadness, fear, trauma, or chaos. It’s a lack of direct connection to their feelings. Crying is a natural physiological reaction to certain stressors or mood states. How then do some folks manage to override nature and shut down the crying reaction?  You can find out about types of tears on the internet. Go ahead, no, wait, well I’ll just tell you. There are three types; the first two are not connected to emotions but to basic physiological functions of lubrication and defending against irritation. The third type, emotional tears, is what I’m talking about.

One person I know claims that she cried so much when her father died that she resolved to never be that vulnerable again. As a result she built up psychological walls and filters to prevent her from crying at all. If a tear should ever surprise her, as it has on occasion, she distracts herself, looks away, and reverses gravity somehow to reel her tears backwards, like rewinding an old videotape.  Any emotion in the sadness neighborhood is locked down also, so her range of emotions is narrower than most folks. You see, you can’t just trap one emotion without trapping a cluster of them, a constellation if you will. Emotions are like mice scurrying about your psychological cheese. Think about that for a moment. As a result she laughed a lot and maintained a helium balloon persona for the world to witness. Something was/is wrong, though. When adults strike you as cartoon characters, something is missing.

Then there’s Justin. He is proudly stoic. “Tears are weakness”, he says without any hesitation. “My mother abused me as a kid with anything that was handy… a wooden spoon, clothes hanger, toys. It didn’t matter. She was determined to make me cry. I refused and it made her all the madder. She’d say, ‘ I’ll make you cry!’ But I just bit down on my lip and gritted my teeth. I was not gonna let that witch see tears on my face. Not then not now. Nobody makes me cry, ever. When I was older, I’d laugh in her face. It pissed her off so much. It was like me spanking her.” Well, that’s the mechanism to shut off the tears. Problem is that emotional tears need to be shed. No matter how many you suck back or blink away, there are millions ready to burst forth. Tears have a job to do

Emotional tears are different from lubricating or anti-irritant tears. Apparently they are full of components lacking in  the other two, like red wine compared to plain water. It’s funny that such tears would be chemically different under analysis, something we know intuitively when somebody’s eyes are smoked out or under the influence of onion vapors. Emotional tears work in conjunction with facial expressions and vocalizations, body language and gestures that tell of the feelings connected to the tears. There is a matching context usually. Tears are the blood of emotions. 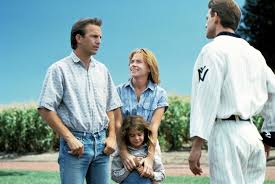 Sometimes at death tears won’t come to the grievers. Some may be in shock while others are tangled up in complex mixtures of fear and anger and love. At my father’s funeral I could not find a tear. I was stoic and reserved. My conscious mind was in “fix it” mode. What to do with our mother? What were the new expectations after my father’s death?  He was such an odd duck that it would be hard to grieve his passing at 68 years of age.  He smoked himself to death with Camel cigarettes over 50 years. My mother labeled him “an emotional cripple”, incapable of appropriate emotional articulation. He did not, however, cripple himself; he had help.

I think it was two years later that I was overcome with a delayed wailing  and whimpering of grief while watching the baseball movie “Field of Dreams” in my family room.  I got sucked into the story and the emotions involved as the protagonist tried to fulfill a mission given to him by an other worldly message coming out of a rookie farmer’s cornfield. “Ease his pain.” “If you build it, he will come.” “Go the distance.” My father was my baseball coach and originated from Boston. One of the clues involved in solving the mystery was obtained at Fenway Park… and I came unglued. Thought I was losing my mind. Fortunately my wife was consoling and wise. She sat with me and said, “You never cried at your dad’s death.” However this attack was not only tears but an intestinal tearing of emotional tumors that I spewed up. I was prostrate, gagging, emotionally vomiting.  I could not understand this horrific upchucking of undigestible dead animals dislodged from my stomach walls.

I asked God to take it from me; I didn’t want it anymore, though I was not certain what “it” was at that time. My head throbbed; my throat was raw; and my tear ducts were pumped dry. 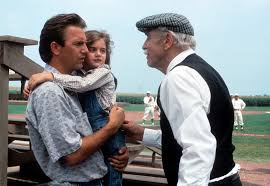 How could this be? Well, there’s a lot more to a human being than the conscious world, folks. You can carry disease or tumors or parasites in you all your life and not know it. It’s not such a big jump to memories and ungrieved losses hanging around the storage bins of your mind. Remember the mice analogy?  Well they were running wild all over my being when I saw Burt Lancaster tip his hat, knowing that he was dead and the heroes of this ballgame were all long dead. The infamous Black Sox of 1919, my dad would have known that story well. He would have known the weirdness of unfulfilled dreams that Lancaster’s character portrayed. He would have wept easily and often throughout this film, completely unable to articulate his feelings further than lachrymosity.

I watched the movie again a couple of nights later. I had a similar reaction at the same places in the movie. I was convinced that I had tripped onto something profound in my psychic life. Grief pressure poured out the second time, but it was not as crazy scary as the first go around. A little finch of wisdom sat on my shoulder, chittering, “It’s okay”.