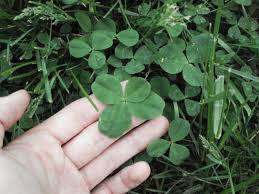 She said in her e-mail, “I asked God for a sign today, a simple four leaf clover would do, to show me that I am cared for. Then I reached down in the rich May grass and found one within my first glance and plucked it. That was an awesome little moment of reassurance which I will cherish because I realized that I am… well, cherished. I am known, noticed, heard, and loved. It feels so good to know the God of the universe knows one of his sparrows has fallen. I tend to forget this when I get off my knees and walk too proudly like a peacock. I go to jail tomorrow.”

In early Christian Ireland St. Patrick used the shamrock as a demonstration of the Holy Trinity, to show how three beings could coexist in one form… Father, Son, Holy Spirit… separate but united at the stem. What struck me about Shelly’s simple request was the extra symbolism. Who is represented by the fourth leaf? Immediately I surmised that she is the fourth leaf, connected at the stem by her faith in God. She was grafted into the Trinity long ago as a little girl, before her fears and addictions led her to rehab, psyche wards, and jail. This realization of connection and provision brought joy to her on her way to jail. It must have been odd for the county deputies to see a lovely, refined young woman smiling approvingly about her incarceration–so gracious, so polite. In an even odder way it was like A Tale of Two Shellys as the enlightened one sacrificially served time for the fallen one. However closely the jailers looked, only one young woman stood before them, yet she was two, no, four in one.

Shelly had been a light to others in her previous rehab stays and psyche ward commitments. She loves easily and deeply, recklessly it turns out sometimes; the same way she drinks. Always in her wreckage she finds her Bible and hits her calloused knees, toddling back to God. Her soft catlike persona charms tough tattooed girls into tender conversations they never intended to  have again. They open up to this quiet clover leaf fairy of a girl.  The staff also notice her special spirituality and engage her there. She is much loved in rehabs, which you can’t put on your resume.  Shelly has that effect on others. She’s a fallen angel who loves too much and guards too little; who listens much and wordlessly speaks volumes. The alcohol serves to moderate stress and pushes back against a feeling of being overwhelmed. Long ago she associated this warm relief with alcohol, her lucky potion.

It was 2008, maybe. Shelly came to me with a former boyfriend, as if  she was on a skydiving date. After her boyfriend turned the spotlight focus on to her, I joked that he’d pushed her out of the plane at 22,000 feet and said, “You’ll get used to this. It’s easy.” on the way down. She laughed nervously without a parachute. He got better and moved on without her. She evaporated into unanswered questions in my mind. Five years later she contacted me. “Do you remember  me? Can we start again?”  On the phone later she said, “Well, I’m an alcoholic now. I guess that’s what’s new.” I was stunned. How does a beautiful, intelligent, talented, educated, artistic young woman become an alcoholic by age 27?  One drink at a time. Those attributes had only hastened her descent. She had not learned to fly but knew too well how to crash.

Blogginis, if you don’t process today’s pain and fear and trauma today, you begin to slip and lose traction in your life. Plus, if you are abandoned and neglected by those who are supposed to care for you, you become lost in your tractionless state… like a car on ice in a night blizzard. Accelerating just makes the vehicle spin wildly and the driver gets crazy dizzy without a horizontal line for reference. Vertigo sets in. It doesn’t matter what gear you are in or if your brakes work. You simply spin counterproductively. Dizzy, spinning, lost, drunken, fallen angel. Tragic beauty. It broke my heart to hear of her crashings, and made me wonder if she was pushed or fell into the abyss. Was she still falling?

Luck and faith have nothing to do with one another. Luck comes and goes; it just happens and cannot be pursued or preserved. Faith, on the other hand, is cultivated. It can be planted and harvested like strawberries. It does not  just happen like a scratch off lottery ticket. Instead it is built systematically from how one interprets experience and develops moral structures. Luck ties in to superstition. Rabbits feet, horseshoes, crystals, and charms are vain attempts at controlling or altering one’s destiny. Faith is more about accepting one’s destiny by understanding spiritually how the universe works. Faith involves some accountability but provides a map for doing life; there is no accounting and no map for luck.

Shelly has a deep faith like a fountain that does not run dry. Unfortunately she has another fountain that pumps out wine until blackout time. Guzzling like a camel at the wine fountain helps her escape the consequences of  her life, but blinds her to the causes of her  problems. She comes to, alone in the desert with a fevered cotton mouth and a migraine. Life just happens to her as it does to all addicts who have urgently surrendered their responsibility. Especially when young, a good thought doesn’t stand a chance against a good feeling, don’t you know? Far away from the wine splash zone there is hope, beyond the good feeling and past the nausea, the cravings, and the illusions lies her broken sobbing self looking for four leaf clovers.