Making all things new again. That’s a tall order, I think. Just making one simple thing new again is hard enough. Refinishing a piece of furniture, for example, requires five times the effort than the original finishing took. Think about it:  you have to strip the varnish or polyurethane with some solvent and a wire brush and fine tools to get into the grooves. Then you have to strip out the stain with more stain remover/solvent. At this point you have to sand the remaining stains or patches of finish to smooth out the original wood grain. Finer and finer grits of sandpaper need to be rubbed carefully with the grain. Then you wipe away the fine dust. Finally you are back to the starting point of new, bare furniture. But that’s what you do to restore the old wood to prime condition so that its luster and deep grain can be seen and appreciated again, or maybe for the first time. 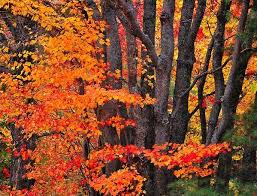 My buddy Clark knows a lot about wood and renewal. He learned about trees as a kid in Patton, PA., walking through the woods to school cuz he’d been thrown off the school bus again and again for being a hyperactive ne’er do well. He was rejected frequently as a kid by humans but not by trees or pieces of wood. He learned about oaks and maples and birch and beech and box elder and walnut and cherry simply walking by them twice a day. He saw pines grow to their fullness and die in his lifetime. However, dead trees simply cross over to lumber for him. He eyes up  trees and looks for unique features that he can use in tables or bowls or just long runs for boards. And then he gets to work creating with saws and planer, lathe and chisels.

A couple of years ago I helped him saw up a spalted maple; that’s a downed tree which has been decaying with fungi but hasn’t rotted yet. The result of spalting is a beautiful array of discoloration, waves and rivulets of brown, red, and black paint spilled throughout the wood. Clark turns hunks of this stuff into gorgeous bowls that appear to be fired ceramic. You have to touch them to believe they are not ceramic but wood, not paintings of deserts landscapes but infected wood transformed into marble. Beauty birthed from death. 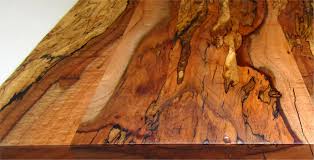 He learned about renewal by living a life full of zest and curiosity… after he was down and decaying like a fallen maple in the leaf mold.  Alcohol was the lightning and tornado that slew him. By age 35 his doctor told him he had a year to live if he did not quit drinking. He said, ” Thanks, Doc. I ‘m tired of living,” and went to the closest bar. He got so polluted on Yuenglings or Iron City beer that the bartender asked, “Don’t you think you’ve had enough?”  “Hell no,” he bellowed and order another. He had one more angry sip and announced, “Now I’ve had enough.” He stumbled out of the bar and right into the path of his beloved daughter and her best friend. (Timber!) No details remain except the pain of shame he saw on his precious girl’s face. Something transformative occurred in that one second. Clark grew on the level of consciousness even as his angry pride fell down face first. He recalls it like Paul falling off his horse on the way to Damascus. Clark went to rehab the next day. That was almost 35 years ago.

Since then he’s been sanding off the old varnish of youth, adolescence and early adult life. The mess of foolishness, the lacqeur of addiction and scars of selfishness. As he does this consciousness raising on a cognitive level, he’s finding more and more to like about himself… compassion, loyalty, a modicum of patience…and an artist’s heart/head/hands package. Late in life, to be sure, but there it is: beauty born from pain and suffering. He is spalted maple through and through, washed by the rivers of alcohol, rejection and rage that are dry riverbeds nowadays. 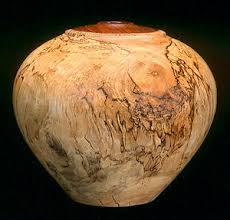 One story of thousands will have to suffice. Ironic, of course. Up the road from his childhood house was a substantial estate owned by the Five Farabaugh sisters. They were well off spinster sisters. Clark’s dad agreed to be an informal caretaker of the property when the only male child left to run part of the A&P store chain out west. One by one the old ladies died off until there were no more. Still Clark’s father “Bunny” continued the upkeep of the property. When Clark went along to help, his father would say, “Don’t even think about stealing anything. We might be poor but we’re honest, by God.” There were many objects and knickknacks all over this grand Victorian house. In the attic the sisters had a miniature classroom where they had played school as little girls. He remembered thinking, “I could learn here. They would not beat me for being wiggly. They would favor me somehow.” In the old days the sisters had given his dad oranges at Christmas, which was unheard of by working class folks. Only the wealthy could afford citrus fruit in winter. Clark’s family not only ate them but his mom made marmalade from the peels. Then one day that fine house and every object in it burned to cinders and ashes. Nothing survived but memories. Nothing.

Nothing worked out in his life.  By age five he had developed a sense of doom. The spalting had begun. He wondered about the loose ends and unfairness of it all–

“Five old ladies, never had sex or got married or had kids or grandkids. What’s the point? They had wealth and it all disappeared. Just a waste. I shoulda stole something but the Old Man woulda killed me.”

Actually it did not disappear. Rather, it was breathed into Clark’s lungs and memory, spalding his soul. I’m sure if surgeons could extricate his soul and sand it down, it would radiate like his hero George Nakashima’s table tops. Renewed for all to see and appreciate. Nakashima was interned during WWII for being Japanese. That was his sole crime. Poetically, tragically,  or ironically that is where he learned to master woodworking under the tutelage of a master Japanese woodworker. More beauty born from pain and suffering.

So  often we screw up the unstained and painless new and have to claw our way back to a renewal that is soaked in barrels of liquid pain. But that is the difference between grapes and wine, sand and pearls, knowledge and wisdom.