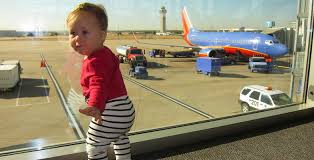 So Grace and the Boo Boo bear had to fly home on Saturday morning. But first there was  a two hour drive to BWI.  Little Leah had been diagnosed with bronchitis the day before. She was having trouble breathing through her nose as she sucked on her binky. Not a good combination. Stu was better after a night’s sleep. It was Grace who was sick now and seriously sleep deprived. The rollicking holiday upper GI flu was raging through her, and we had to get to the airport by 10 a.m. Nothing was working out. Even her sister Erin had reinjured her own ankle while running to catch a train that wound up being late leaving NYC. That required a doctor’s visit on Friday.  Sister Jess was coughing and hacking too. But Grace had the jackpot… Abysinnian Anthrax Flu. It’s hard enough to travel with 100 pounds of checked luggage and a baby and baby stroller, but add acute sickness and five bags of Christmas presents to the mix. See the problem?  How to eat the figurative elephant with a plastic  spoon and a thimble?

Well, the baby presents had to stay at our house. That was an easy decision. However, getting into the car and driving winding, curving roads for an hour to Rte. 15 was ugly. Nothing felt right as she sat doubled over next to me, throwing up into zip lock bags while Stu tried to comfort the fussing Leah in the back of our tiny Honda Civic. That space is small to begin with, but when you add a puking mom and crying baby, well, it started to feel like I was one of the famed Chilean miners two miles underground, without food or water, running out of air and way too close to bodily functions. Tension congealed in the cabin, thick and viscous. I drove as fast I could. If I focused on the task of safely speeding down the interstate while rubbing Grace’s back, I would not have to process the agony gushing out of her periodically. Thank God, Leah slept for most of an hour in the middle of our trip through Hell.

At certain awful moments Grace gasped, “I can’t do this.” My right foot just stepped harder on the accelerator, 80 and 85 mph on Route 70 East. I imagined the Maryland State Trooper pulling me over. I would simply let him or her draw their own conclusions from the emergency room in a phone booth scenario that we were. In times like this I have to shut off my empathy receptors. A switch unconsciously flicks to the off position, like butchering that beautiful deer earlier this month. You can’t maintain that emotional/spiritual connection and do the hard task at hand. The will must override the compassionate heart. The lovely lull was over, Bloggywogs. It was war in a car. I didn’t dare turn on the radio because we had passed the irritation threshold and were running out of oxygen. At her lowest, Grace reacted hostilely to Stu’s comment about a good night’s sleep helping with symptoms.

“Shut UP!” Then, after a moment of silence, “I’m sorry. That was mean.” It was the Absynnian Anthrax Flu demon talking first followed by the daughter I know and love. I felt more and more like Chilean miner #9, Marco, the part time goat herder, wishing I was with the goats right about now instead of slowly clawing for survival on Rte.195.

Leah woke up agitated and began crying again. Stu ran through his empty box of baby management tricks too quickly. Grace hissed out, “Sing to her. It doesn’t matter what your singing voice sounds like!”

Stu was learning what I’d learned decades ago:  when the sickness and stress bubbles are erupting like champagne and battery acid in a Styrofoam cup, keep your head down and mouth shut. Nothing, I repeat, Nothing you say can possibly help. Even though Stu had trained to swim out of a submerged helicopter in pitch black water without freaking out,  he was not skilled in domestic warfare in a car. He had no chance.

The transit from one place to another was in full raging swing. From home that isn’t home any longer, to a place that is but not for long… Ft. Rucker, Alabama. From routine to controlled chaos. From formerly familiar to nearly hallucinogenic. From hard to impossible. Civilian reality to military mundanity. Those were just a few of the transitions whirling about the loaded down cherry red Civic with tan interior. Pressurized like an overinflated set of steel radial tires. From sick to well and back again. From pleasured expectation to sore butt reality with no rest stops in between.

We finally got to the departures ramp and circle at the terminal….Southwest, United, Air Tran, Delta. “Oh, Thank God!”  I ran in and procured a wheel chair for Grace. Stu hired a skycap to haul two huge bags and three small ones while he put Leah in her folding stroller. The problem was this:  there was no one left to push Grace in her wheelchair. I could not stay because the cops were ushering motorists away from the curb as soon as possible. I hugged her goodbye and exchanged “I love you”. She felt frail and small again, like a little girl. She leaned on the wheelchair and slogged forward toward the automatic doors where Stu was checking in the mammoth bags.

I pulled away breathing hard and deep, wishing I could take her pain and pressure off her shoulders, knowing full well that such things are what carve parents out of soapstone. Love sacrifices. True. And you never stop parenting. Amen.